Some Thoughts on Gnomes for Swords & Wizardry Light 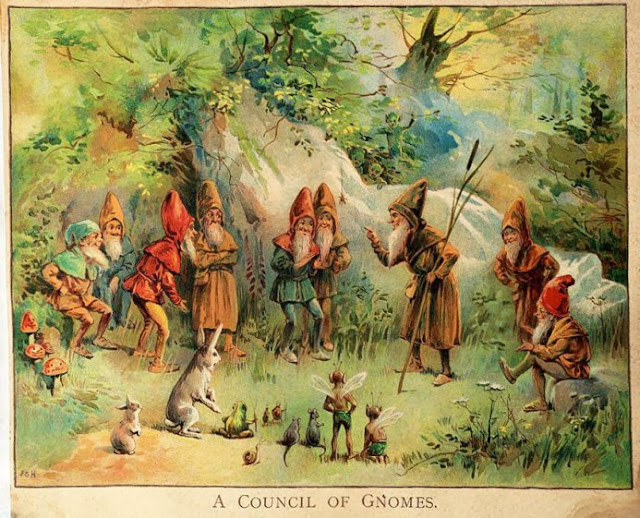 It came up recently in a discussion online. You know the type.

Still, it got me to thinking about Gnomes in Swords & Wizardry Light. They've always seemed like an afterthought, somewhere between Dwarves and Elves in the "traditional fantasy RPG" evolutionary scale.

I like them, but in 1e they could be Illusionists, and Illusionist / Thieves rocked damn it! SWL doesn't have Illusionists, not does it allow multi-classing. Whatever shall we do?

I see them as particularly skilled in disarming (not necessarily finding) traps as well as opening locks. It just seems to be a gnomish thing to do, especially as they are often portrayed as a race that likes to tinker with mechanical (and sometimes Alchemical) arts. I'd go as far as give all gnomish characters, regardless of class, a 1 in 6 chance to disarm traps - which is a 5 in 6 chance of something going "bad". Which I also see as part of gnomish culture. Which bring me to...

An innate yet random magical ability - random in that the one time per day they wish to draw upon the ability, they must roll on a table much like a Wand of Wonder (you DO have an entry for the Crowdsourced Wand of Wonder, don't you? Prizes and everything). Might be good, might be bad, might just be awkward. It should still be entertaining.

Figure limit them to the Fighter and Thief classes, because really, who wants a gnomish cleric holding your health and life in their hands? As for magic-users, I don't see them having the focus.

Ah well, just thoughts at the moment. I'll refine these later ;)
Posted by Tenkar at 10:56 AM