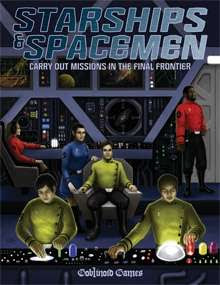 Looking for an OSR powered clone of Star Trek: The Original Series? Look no further - Starships & Spacemen Second Edition is today's Deal of the Day at RPGNow.


Boldly explore the galaxy in search of alien civilizations! You take the role of a Military Officer, Technical Officer, Science Officer, or Enlisted Man in the Galactic Confederation. Travel in a starship under your command, on missions of first contact, rescue, exploration, and more in a galaxy full of hostile aliens. Try to maintain the tenuous truce with the militaristic Zangid, and fight the Videni who may look like your Tauran allies, but do not adhere to a philosophy of peace and logic.

Remember, 5% of all purchases at RPGNow go to fund The Tavern. Tip your bartender ;)

Email ThisBlogThis!Share to TwitterShare to FacebookShare to Pinterest
Labels: deal of the day, goblinoid games, OSR, starships and spacemen