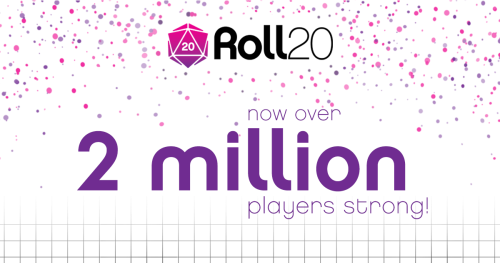 Roll20 has hit the 2 million player mark and then some. I was an early backer of the Roll20 Kickstarter, and truth be told, I was a little nervous with the initial release. While I wasn't asking for much, even some basic things as drawing tools were borked.

Flash ahead a bit over 4 1/2 years and not only has Roll20 become my Virtual Table Top (VTT) of choice, but that of over 2 million other players. Pretty impressive. Actually, it was my VTT of choice even with the initial quirks as the potential was just that good.

I've used MapTools, Klooge, ScreenMonkey, Fantasy Grounds 1 & 2 and a handful of other VTTs that have come and gone over the last 10 years or so and none have come close to the usability of Roll20 for me. The learning curve is small and the depth is huge.

As I've said elsewhere, I'm very much a minimalist when it comes to running my games online but there are a few features I absolutely need: online die roller, chat and fog of war (we use a third party app for voice and video usually) for my game map. Everything else is optional and not needed for my use (you milage and needs may vary). The scalability of the features in Roll20 is probably its strongest asset.

Which reminds me, now that we've resurrected the once a month "B" Team its probably time to bring back the Saturday Night Team, now with a "Lighter" Swords & Wizardry ;)

Email ThisBlogThis!Share to TwitterShare to FacebookShare to Pinterest
Labels: roll20