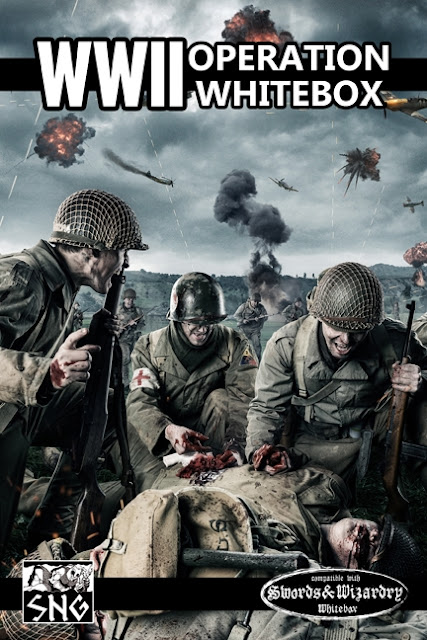 Full disclosure - Pete showed me the work in progress of WWII: Operation WhiteBox months ago. I was still actively working and I read this at my desk on the overnights. It read well then and looks amazing now. Seriously, if you want to get your feet all muddy and your uniform all bloody, your couldn't ask for better. Pete's research is well done - this isn't a hack job by any measure. I'll get a review up, hopefully in the next week or so, although my plate is fairly full at the moment.

Here's the blurb to help you decide:

In WWII: Operation WhiteBox, the player characters (PCs) play the role of WWII special forces operatives. They may be formally trained and part of an officially designated special forces unit such as the SAS or U.S. Army Airborne, or they may simply be guerilla fighters dedicated to making life hard for the German Army. They may also be covert agents working for organizations such as the SOE or OSS. Whatever their affiliation, their job is to complete missions behind enemy lines, paving the way for the next Allied advance.

WWII: Operation WhiteBox is a standalone game that uses the Swords & Wizardry WhiteBox rules as its base. In addition to standard gameplay rules, the game contains the following:

PERSONAL COMBAT: Rules for "theater of the mind" combat including new rules for automatic weapons, using cover and concealment, and explosives.

GAMEPLAY EXAMPLE: A gameplay write up to show some of the new concepts in action.

RESISTANCE AT THE PONTEVILLE BRIDGE: A sample mission deep in Normandy.
MINI-SETTINGS: Nazi Superscience, Nazi Occult, and Nazi Space elements to liven up your game!

PURCHASE THE PDF NOW AND RECEIVE A DISCOUNT ON THE UPCOMING PRINT VERSION!

Remember, all purchases using The Tavern's OBS affiliate links puts 5% of your purchase price into The Tavern's coffers. Don't leave that money on the table for the greedy corps! Tip your barman!  ;)
Posted by Tenkar at 9:49 PM