Over 4,700 Copies of Swords & Wizardry Complete Downloaded from The Tavern since November, 2013 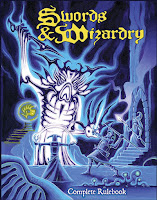 I was just checking the download figures for Swords & Wizardry Complete and it looks like over 4,700 copies have been downloaded since November of 2013 from The Tavern. Not too shabby, and of course that doesn't include all the other ways to grab this free PDF from other sources. Initially I was distributing the copies via email, but a bit.ly link and a Dropbox folder did the trick for my sanity. If you don't have a copy yet, grab it here at  http://bit.ly/TenkarsTavern

I'll be doing something similar for Swords & Wizardry: Light when it releases, but instead of the bit.ly link directing you to a folder, it will be a page here at The Tavern with assorted links and downloadable resources. At the moment, the page is fairly sparse (just the map of the immediate setting), but I suspect by the end of the summer there will be an assortment of links and downloads. http://bit.ly/SWLight