No Thank You Evil! Session Two - The Kid's All In 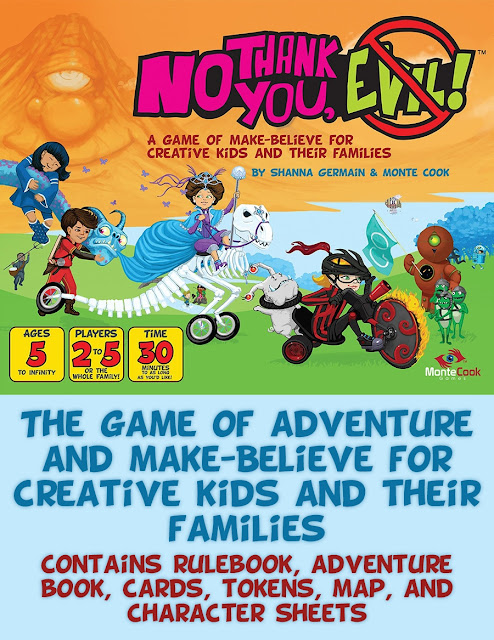 I had "uncle duty" this afternoon. So, after lunch and Friendly's we came back to the house. Shannie played with the dog and uncle tried to catch up on the day's events.

I heard noise in the hall and then little feet running down the stairs.

"Uncle! Come down. I want to play The Game!"

War, the card game, has been the game recently. I figured if I got lucky, I could get some Spongebob in at the same time.

Imagine my surprise when I saw No Thank You Evil! The Deluxe Box, spread out ALL over the living room. I mean, it looked like the game had exploded.

"We're going to play The Game!"

Damn. I wasn't ready. Hadn't read the second adventure in the book - ever.

"Er, yeah Pinky. Give me a few minutes. I need to read and catch up."

"I know you have to read Uncle, but I want to play. Read fast, K?" 5 year olds are not known for their patience.

I'm not going to spoil the adventure by telling it in detail, but the lass impressed me with her diving right in, not just with the pretend / roleplaying, but attempting to circumvent the rules and tell me what she did and how she succeeded before she rolled any dice or roleplayed out the encounter. Surprisingly, when it was pointed out to her that she was jumping the gun, she didn't fight it but went along, explaining what she was attempting and asking how do we find out if she succeeded.

And after she finished the scenario she wanted to keep the roleplay going.

She may be stepping up to Swords & Wizardry: Light sooner than later.

If you have young kids that have an interesting in roleplaying games, the physical components alone make No Thank You Evil! an awesome value. Stickers everywhere and enough pieces that you can lose some and you'd never notice. Wise game design, that ;)

Email ThisBlogThis!Share to TwitterShare to FacebookShare to Pinterest
Labels: no thank you evil, one on one play, review