Can You Impartially Pick Your Own Products as a "Pick of the Week"? 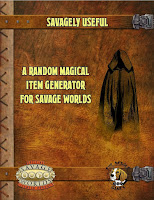 So, earlier this afternoon I was doing some catch up reading on the internet and headed over to ENWorld. Say what you want about ENWorld (and I'm sure some will) but it does occasionally have stuff that relates to Old School Gaming. Sean Fannon has a weekly article of RPG related picks titled, accurately enough, Sean's Picks of the Week and as it was one of the articles that was prominent on the ENWorld home page, I figured I'd give it a look. I always expect it to be Savage Worlds heavy, but then I noticed something else.

One of his picks, A Random Magical Item Generator for Savage Worlds, was published by Evil Beagle Games. That's Sean's company.

So I followed the OBS link. Sean wrote it. Now, it no way does Sean claim his picks are reviews, but he pretty much does come off as endorsing the picks he posts. Endorsing yourself seems kinda greasy I guess. But it's just the one time, right?

It's not just the one time.

I went and looked at the other three Sean's Picks of the Week for the month of April and two of those weeks had products highlighted that Sean either wrote, his company published or his business partner at his company published (The post on 4/1 had two titles in question. The post on 4/15 has one by Evil Beagle.) The Shaintar release jumped right out at me, as I remember Sean being involved with the setting since the beginning.

I find those numbers to be distressing.

This comment by Sean, in jest (I assume) on April 1st was in reference to Accursed, written in part by his business partner at Evil Beagle Games:


"No, not doing any April Fool’s mess today, all the Picks are legitimate, friends. This is the latest for Accursed fans, featuring new information and game material for the world of Morden."

Are they legitimate? Two out of five picks that week were written by Sean or Ross Wilson, his business partner.

With the Evil Beagle releases Sean does mention his or Ross' involvement. The Shaintar release Sean doesn't mention mention his current involvement, but does acknowledge previous involvement ("Another in the cavalcade of Shaintar Guidebooks is out today, friends, and this one covers the kingdom I first created for this world I still love dearly.") and there is no mention of Ross' involvement in The Accursed.

Now, I didn't go back to March to see if the pattern was there too, but the idea that 20% of April's Picks are not just boosting the signal of friends in the industry but your own work and that of your business partner seems less impartial they I would like to see.

As an aside, I have absolutely no problem with the use of OBS affiliate links in the articles in question (it was brought up by an ENWorld reader as a comment to one of Sean's weekly posts.) I use them here at The Tavern. They are an unobtrusive manner it which to make a few coppers, which in my case get reinvested right back here for the most part.

Email ThisBlogThis!Share to TwitterShare to FacebookShare to Pinterest
Labels: rantish