Red Tide on Sale for $4.79 in PDF This Weekend Only 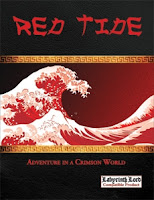 You know about +Kevin Crawford 's Red Tide I hope. It does for fantasy OSR sandbox play what Stars Without Number did for sci-fi OSR sandbox play. It's one of the resources that sits on my desk, waiting to be used at a moment's notice.


In this book a Labyrinth Lord will find all that is required to run a sandbox game of adventure in the Sunset Isles. In addition to the races, classes, and sorcery of this savage land, a referee will find special tools and resources for creating shadowed courts of quarreling nobility, cities rife with struggle, wild border settlements that cry out for the help of heroes, and dark places in the earth known only to the dead and the damned. These tools will aid not only campaigns in the Sunset Isles, but also those games set in other lands of savage mystery and bloodstained blades.

Expanding on the tag system found in the free Stars Without Number sci-fi role-playing game, Red Tide includes more than fifty new tags for fantasy cities and borderland settlements, along with more than 25 pages of GM resources including culture-specific name and place lists, unkeyed blank maps for quick sandbox use, four pages of room dressing and treasure possibilities, and a new "diagram dungeon" method of quick dungeon generation with a worked example.

Did I mention Stars Without Number is free?
Posted by Tenkar at 8:25 AM