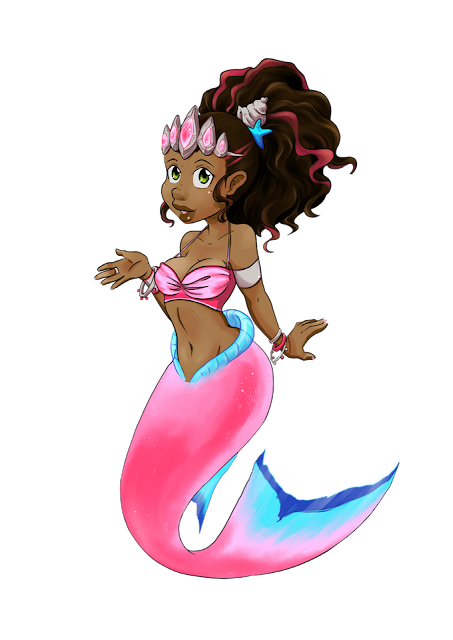 13 year old me would be all over this. The mermaid pictured above, not the game itself. Or is it a novel. Mermaid's VS Zombies is something, but I'm not even sure the creator knows what it is.

Why do I say that? Because their goal, which has been reached, is only $250.

So, what is the game about:


Mermaids vs. Zombies is about the underwater apocalypse. In short it's essentially about you and your cousin princess Bubbles, trying to find a way to end the zombie apocalypse, that's infecting Mertopia. It's an rpg visual novel hybrid.  The visual novel portions are almost all completed, however the rpg elements have yet to be implemented due to a lack of budget. (this is a huge flag, because wouldn't the RPG elements be the story itself?)

Right now the most of the budget raised here will go into three categories. (finding a way to spilt that $250 goal equitably should be interesting) Advertisement. Programming and the main one, the Art resources (wait, I thought the visual novel parts were almost completed).  Right now I'm hesitant to show any game footage due to the game not being fully polished (not confidence instilling) . Shall I get requests from backers I'd be more then happy to show off what we have so far, but the reason I have yet to do so independently is because it's not fully polished.


The programming aspect I have mostly covered. However I would like to recruit at least two more programmers so I'm not as swamped with work as I have been. (and pay them with what? there is no budget to speak of even with this being funded)

Lastly Advertisement: shall we make it over three hundred I will do my best to not only get this game on consoles, but also on platforms such as Steam. Steam alone cost's around 100$ for you to even be considered. (well, there goes the ability to even buy those two programers lunch)

Budget aside I plan to have this game, be very diverse. With characters across the board in marginalized groups. Right now the game has a racially diverse cast, with one or two disabled characters, and lgbtqia+ characters as well. Princess Bubbles, and the player are both Black, Zib and Pilo are asian, Zib is agender and visualy impaired, and Billino is bisexual. The only one not in some sort of marginalized group is Jerins, and he's...kind of a joke as a character.  (The creator self identifies as transgender, so I understand where it is coming from, but the only "non marginalized" character is the comic relief?)


Then we have the Risks and Challenges section. I'm just going to opt for the screen shot and avoid commenting. It really speaks for itself. 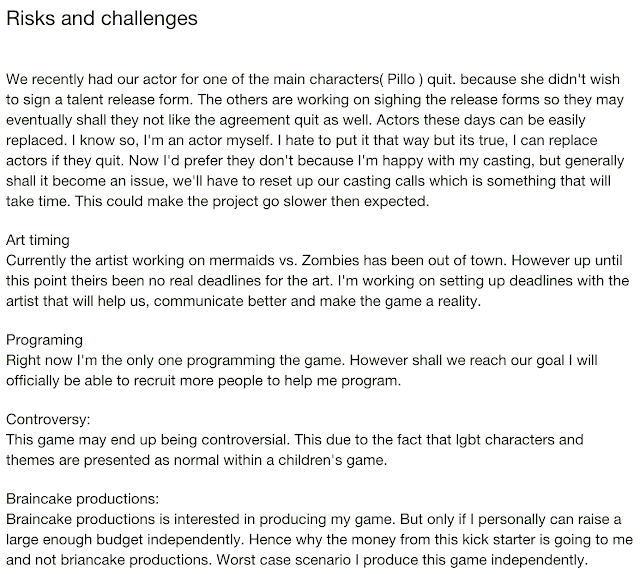