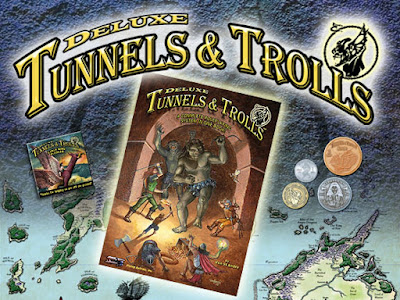 In case you missed it, Deluxe Tunnels & Trolls Kickstarter had an estimated release date of August, 2013. Now, I'm I know I'm going to get flack for this but releasing the rules in PDF earlier this summer does not constitute delivery. Nor does shipping out adventures and pencils and other filler.

The latest update (just a snippet) - "Friends: During our kickstarter, we promised you all a pdf of a GM screen for Deluxe T&T. It is now done, and available from Drivethru using the following link: (link not included obviously)... The hardcopy of the GM screen is now at the printer, and those of you who paid $5 for a hardcopy will be getting it soon."

Here's the deal, at least for me. All these extras are just that - extras. What good is a hardcopy of the GM screen if the 10 copies of the softcover and 1 copy of the hardcover of dT&T I paid for are still not on the horizon? It's hard to run a game with only 1 PDF copy of it in the group (sure, I could pass it around and make copies, but that would be unethical. Maybe one code per physical copy paid for would have helped)

Eh, it will still probably ship before Far West even gives a complete PDF...
Posted by Tenkar at 10:12 AM