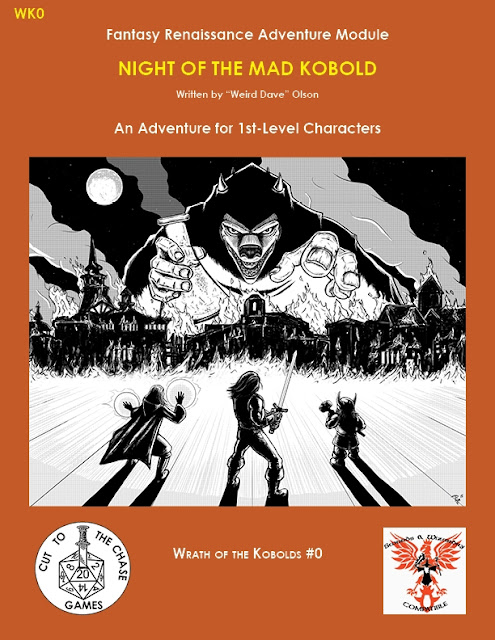 Night of the Mad Kobold is a free offering from Cut to the Chase Games. CttC is apparently offering this adventure for free in 3 different flavors to bring some attention to their soon to be released Kickstarter.

The price is right. I love free adventures because I always find something to steal even if I don't use the adventure as is.


The town of Cresthill enjoys a favorable location along the winding Graywand River. Trade is good, and the prominent gnomes of House Kelver run most of the businesses to the prosperity of the people. Now, however, a dangerous lunatic—a kobold from the nearby Talon Hills—has decided the gnomes of House Kelver need to be a taught a fiery lesson, and only a band of heroes can stop his plot.

WK0 Night of the Mad Kobold is a short adventure designed for a group of six 1st-level characters for the Swords & Wizardry RPG, but compatible with most OSR games (Labyrinth Lord, OSRIC, etc.). It is set in a generic fantasy setting, easily transportable to most fantasy campaigns. It stands alone but can also serve as an introduction to the WRATH OF THE KOBOLDS module trilogy from Cut to the Chase Games.

A Fantasy Renaissance Adventure Module brought to you by your friends at Cut to the Chase Games!

SPECIAL PRICE! FREE until the end of the Fantasy Renaissance Adventure Module Kickstarter* (launching in early August 2015). Get it while it's free!