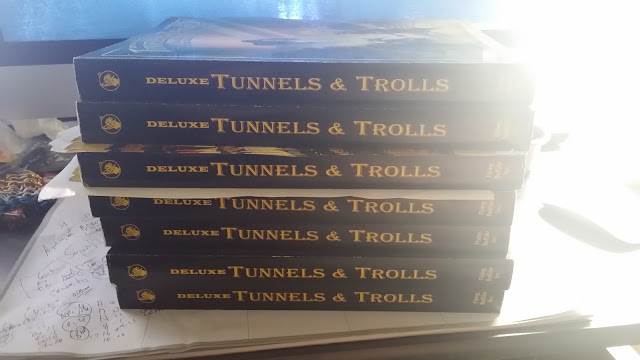 Yes, Deluxe Tunnels & Trolls is huge. Those seven copies are quite heavy. My copies took a little wear on the edges as there was no packing on the top inside of the box to keep them from sliding around and the box was made for 11 copies (so the side of the box says). There were some inserts included. Some were folded over but in truth that doesn't matter much. I doubt I'd find myself hanging Fellowship of the Troll posters on my walls at the ripe old age of 48 ;)

I'm still waiting on my hardcover copy (which may not be back from the printers) and three more softcover copies. I'm going to assume they were (will be?) shipped separately, as it was over 16 bucks in postage just to get me these seven copies.

So yes, it looks like we can just about stop the clock on this project. Let me know in the comments of this page if you got your copies...
Posted by Tenkar at 11:46 AM