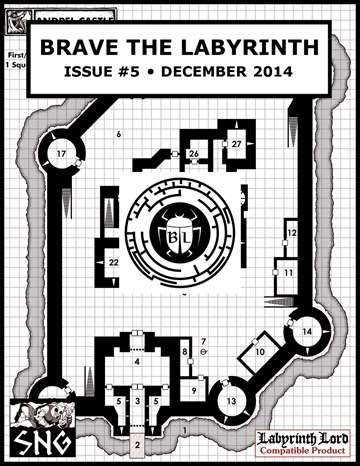 The latest Brave the Labyrinth released this weekend and as always it's filled to the brim with OSR goodness (Labyrinth Lord is the particular flavor.)

I'm a big fan of +Pete Spahn and if somehow you haven't grabbed a copy of the Guidebook to the City of Dolmvay, click the preceding link and do so. It is "Pay What You Want" and it's a great example of a crowdfunded project giving back to the community. Heck, the Tavern even makes an appearance.

Back on target. Brave the Labyrinth Issue #5. See the cover art above? That's part of a multilevel castle for you to use and drop into your campaign, including a dungeon level. Nothing is state out. All the rooms are yours to fill as you see fit. Fun :)

This issue also has an article about a demon lord, which is like serendipity, as we just talked about demons on The Brainstorm podcast. Seriously, the episode dropped yesterday.

We are introduced to two new elf subraces - the Phase Elf and the Void Elf. The first has it's roots in inter-dimensional space while the second subrace was formerly star-faring. Both make elves something "not of this world" and make for interesting twists and assumptions.

+James Spahn (no relation to Pete, James is known for Barrel Rider Games) has an article on the patron saints for the church of law and order.. If you are using Small Niche Games Amerth setting they would drop right in.

Next up is an article for mundane and magical items to assist those with dishonest (or thieving) tendencies. I like it. I'm going to steal much of this for my Swords & Wizardry campaign.

Werewulfs and Familiars is more of a niche article - well written but only applicable to certain campaigns, but definitely mineable for ideas.

Ampulex the Emerald Jeweler is full of ideas and plot hooks.

Beetlemirth (cartoons), a review of The Caves of Ortok and an excerpt from Time of the Dying Stars rounds out the issue.

At 39 pages, Pete is not fooling around. Well done and packed to the gills.
Posted by Tenkar at 4:09 PM