I remember the Gor series well. I picked the first 12 books or so up from a garage sale in the late 80s at a quarter a book. Made it through the first five or six books before giving up on the series. The sex / rape / slavery depicted was not what I was looking for in my escapism. Well, that and the writing was fairly poor. Yes, i devoured almost all scifi and fantasy I could get my hands on those days, good or bad, but even I had my limits.

So, 25 years after I was introduced to, and decided to pass on Gor, we now have an Indiegogo project to make Gor into an actual RPG. Luckily(?) for us, James Desborough is keeping it to it's roots: 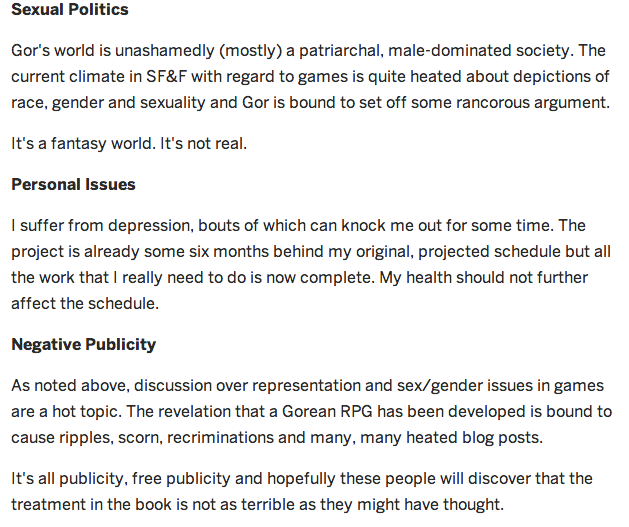 Yeah, as I recall it wasn't so much sex / gender issues as it was slavery and rape. Not things I want to fantasize about in my roleplaying.

No mention or hint at the actual game system isn't helping sell it to me either. I mean, James says the work is basically complete, so how about some ideas on the system that may be worth strippin away from it's setting.

Oh, and it's "Flexible Funding", the "Fuck You" of crowdsourced funding - even if it doesn't fund, your pledge is still taken. So in reality, there is no goal post to hit.

I am sure all publicity is good publicity - but I'm not including links. If folks are really that interested, they can find it on their own.

Sometimes as a hobby, we are our own worst enemy. I'm sure James is betting his own history of internet battles will be as much a selling point as the setting itself. It will be a shame when I find myself on the side of his detractors for what seems like the first time.