Last Night, We Playtested an Upcoming S&W Adventure - No TPK, Yet 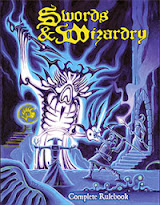 Last night was my second session of Swords &Wizardry from the player's side of the screen and our second night of playtesting, and it got me thinking.

Neither of my S&W campaigns has a cleric in the party. For the playtest, I chose to be a cleric and I've noticed an important thing - undead are killers without a cleric's turning ability. Seriously, swarming undead that don't have a morale check to worry about are killer. It's also pretty swingy in the numbers it effects.

Hold Person is a kick ass spell. I always looked at it previously from the DM's side of the screen as the key to "potential TPKs", which isn't a bad thing, just something I had to be prepared for. As a player, it does an amazing job cutting down human and similar adversaries, without the mess of fireballs and lightning bolts (not that the party has access to such at the moment).

Being a player means "thinking out of the box" in OSR styled gaming. You are not looking to game the system, you are looking for the DM to supply game mechanics and feedback based upon your thoughts and plans. Case in point - last night Calishun, my cleric had turned a pack of ghouls and had them cowering on the far side of the room. We wanted to search that side of the room, and I asked our DM if I, moving slowly and cautiously, could use my turning ability to move them out of that corner. I was thinking classic vampire movies AND magnets with the same poles facing each other. My idea was plausible, so it worked. I'm used to dealing with what the players throw out at me, but this was me throwing a challenge out to the DM. I would have gladly accepted any answer, as I trusted +David Przybyla to make the right call (the right call didn't have to be what we wanted to happen).

Actually, there were many times in last night's session where the dungeon's environment challenged us to think of things that weren't covered by the rules. As a DM, I reacted to such feedback from my players instinctively, but as a player, it was much more of a challenge. I thoroughly enjoyed it :)

As an aside, I was able to mail out the DAGGER RPG to all that entered the OSR Superstar Competition last night, stealing time in the "in between moments" to do so. If it's not in your emil and you sent in a submission, let me know so I can correct it.
Posted by Tenkar at 10:46 AM