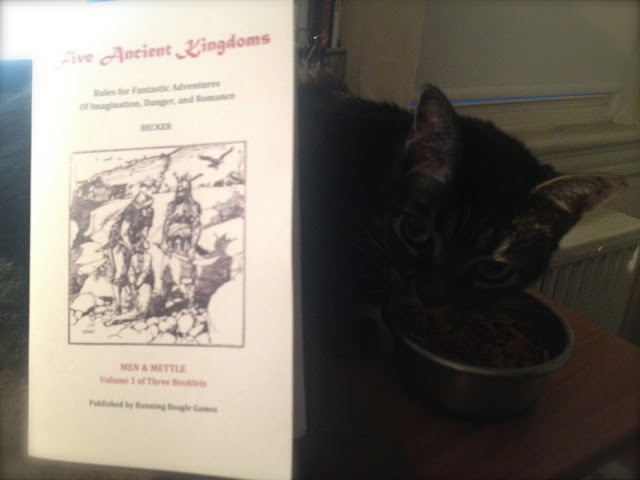 There a lot in this little booklet of Men & Mettle. Enough to make you think about ways to borrow or steal for other OSR style games. Which is good, because the OSR works best when you you create the RPG equivalent of a Mongrelman to your own desires ;)

Hit Die and Hero Points for example. Heroes get Hit Points, but monsters and most NPCs just get Hit Die. One Hit Die equals one Hit of damage from a PC. If a player takes a hit, each Hit Die of damage is equal to 1d6 of HP loss, Kinda speeds up combat, which is probably already sped up by the focused use of D6s to resolve everything. Yeah, it takes a few readings to get the whole thing down, at least it did for me. YMMV.

Encumbrance and Movement is less about counting pounds of weight (although there is some of that) and more about bulk and ease of movement (or lack there of). Interesting way to handle it, especially for someone that generally hand waves this shit with most of the games I run. I tend to rely on common sense, and this seems to be much like common sense.

Experience Points and Level Advance should feel familiar initially - kill things and take their stuff, but there is more - taking damage and surviving, visiting strange lands, finding and messing around with artifacts and keeping to your alignment and motivation. Then there are "milestones" - events that are so important, so striking, they immediately advance the character to the next level. Of course, this is discussed in Book 3, and we are just about halfway through Book 1 ;)

Combat is the next part, and I expect that will need a post all it's own. It's different than what I am accustomed to, but it seems to work - and at the same time, it confuses the hell out of me. I expect I'll need to run a mock combat or two to full grok it - which I will do for the next post in the series.

Five Ancient Kingdoms is certainly an interesting read...
Posted by Tenkar at 10:14 PM