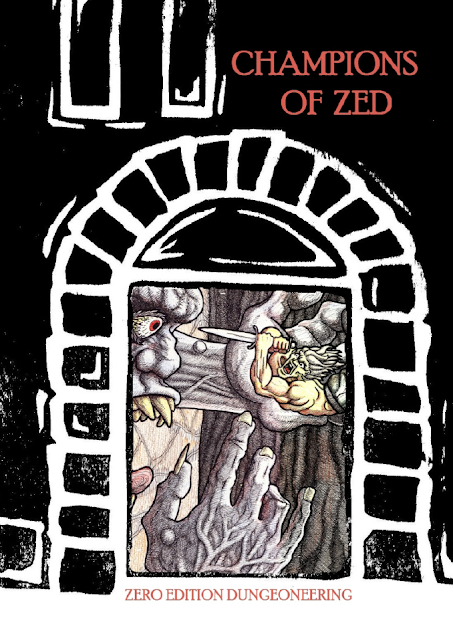 Champions of Zed is a Kickstarter that I truly thought would never reach completion, so I stopped reading the infrequent updates for the most part. Which was foolish, apparently, as the finalized PDF was linked in the last update and even the previous update. Huzzah!

Was it worth the wait? Too early to tell at this point. In many ways, it hews close to the 3LBBs, but in others it goes far astray. I've been picking my way through the PDF in an admittedly haphazard fashion, hit the combat section and I stalled with some major head scratching.

In any case, Champions of Zed is Original Dungeons & Dragons as it "might have been":


To the extent possible, that is what Champions of ZED is. Champions of ZED aims to be very, very close in fact and spirit to the original three game booklets published in 1974, the earlier, recently recovered draft known as Beyond This Point be Dragons (aka the “Dalluhn Manuscript”), related materials directly from the two authors, and relevant portions of the Medieval Miniatures rules of 1971. The overriding goal has been to harmonize the collaborative genius of these two men, minimize the post publication input of others, and reset to zero the worlds greatest fantasy game, as only an inquisitive and careful editor can. Nevertheless the purpose for creating Champions of ZED is not simply to please a limited group of game Grognards interested in historical what-ifs. Rather Champions of ZED is designed to serve as a pathway to a different and neglected style of collective world building and open, exploratory gaming, or as it is often called, “Sandbox” play.

That's one hell of a goal, and it's going to take me a while to determine how many of those posts it actually hit. It's strange, in many ways I feel like I'm reading one of those classic Marvel Comic "What If"s I used to enjoy back in the early 80s. Familiar yet strange.

I give huge props to Daniel Boggs for including the following text:

No copies may be made for sale or open distribution without the express written consent of D.H. Boggs.

It may be a while before I get to review this properly, as I still need to finish Five Ancient Kingdoms and Whitehack first.

Email ThisBlogThis!Share to TwitterShare to FacebookShare to Pinterest
Labels: champions of zed, OSR