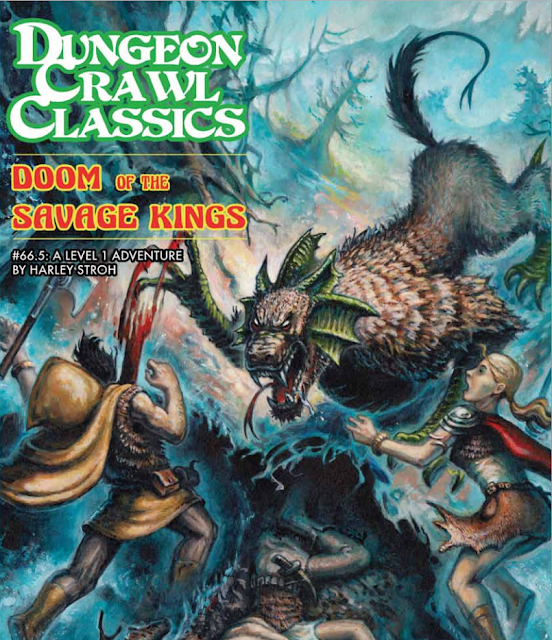 Last week, some amazing die rolls by the party's arcane casters changed the direction and tempo of Doom of the Savage Kings a bit. Gone were the Jarl and his men. Added this session was +Erik Jensen 's gaggle of 4 peasants, handily recruited from the village's lynch mob ;)

- reminding the "lawful" character that killing in innocent so that you can use the now deceased body in a manner benefiting the party is NOT a lawful act ;)

- Looting the Jarl's Hall and finding little of true value

- Dealing with the Jarl's seer, and getting nothing but frustration

- Finding the "box within a box"

- The party Wizard has now cast TWO consecutive spells with a "natural 20". He so badly wanted to leech off of the halfling. I had to point out that even the roll he had would have destroyed half the village with his Scorching Ray, and he would be better ofhf notching it down one result. Sad Wizard. Happy, not burning village and dying villagers.

- Watching one of the "gaggle" get killed from a fellow party member's fumbled attack roll. The funnel finds itself some times.

- The funnel strikes a second time, as a snake-like thing swallowed another member of the "gaggle". And then there were two.

Third session of Doom of the Savage Kings is set for next saturday night.

I'm impressed with how well Google Hangouts / Roll20 handled 7 players (10 characters to start - 8 by the end of the session). Of course, somehow I had forgotten to upload the 2nd and 3rd maps for the adventure - brain fart - but seamlessly did so mid session. Huzzah!
Posted by Tenkar at 9:24 AM