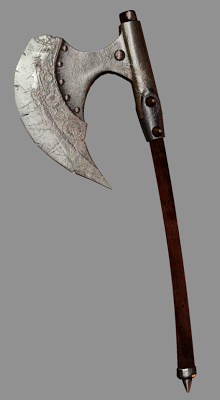 Meaganbrand's Axe of Giant Slaying is a normal + 1 Battle Axe with the following special ability:

Upon rolling an "8" on the 1d8 for damage upon a successful hit, an additional 1d8 is rolled and added to the first 8 points of damage. This is done until the wielder no longer rolls an 8.
The + 1 magical bonus to damage and any strength bonus if aplicable is added to the title from any dice rolls at the end. (think "exploding dice")

For example: Tenkar hits an Ogre with Meaganbrand's Axe of Giant Slaying. He rolls an 8 on the 1d8 for damage, so he rolls again. He rolls another 8 and rolls again, rolling a 5. His total damage is 8 + 8 + 5 + 1 = 24 points of damage plus any bonus from Strength.

Note: The axe is named for a previous wielder who slew a Hill Giant with a single blow. It has no special powers against giants or giant kind.

Side Note: As a DM, I like magic items that players and their characters want to retain even after they've "outgrown them". At it's heart, Meaganbrand's Axe of Giant Slaying is a + 1 magic weapon, but in the hands of the right player, it becomes a unique magic weapon they may decide to keep even over that + 2 or + 3 weapon just found in the latest horde. Make it special and it may just be special for the life of the character ;)