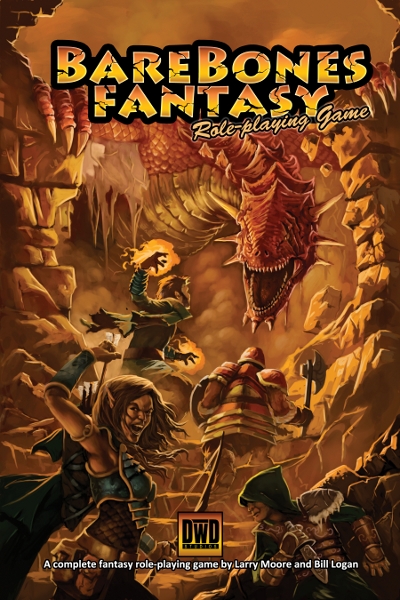 I'm sure you've seen numerous posts talking about Barebones Fantasy and the fact that it has released in PDF. I have one serious question - when is the Print on Demand coming?

It's not like you can't print it at home. DWD Publishing was nice enough to include a "printer friendly version" with the purchase of Barebones Fantasy, but a POD option would be nice. Larry, if you're listening, I have spoken!

I need to set aside some time to do an actual review of the system. I'll say this much, it's one of the few systems that my "grognard mind" can wrap around that isn't D&D based. I still need to work on the spell section, but it isn't so big I'll fail my Knowledge Roll ;)

I'm very impressed with the rewrite of the Maidens of Moordoth One-Sheet into a full sized adventure that's included with the Barebones RPG.


It may be small, but this game is a complete and unique fantasy role playing game. Add pencils and dice and you’ll have everything you need! Create your character and embark on an epic journey wrought with peril and rewards limited only by your imagination. Flip through the pages and you’ll see:

Classic character races: Elf, Dwarf, Halfling, and Human.
Eight character skills: Cleric, Enchanter, Leader, Scholar, Scout, Spellcaster, Thief, and Warrior.
Spells: 17 very flexible magic spells in a unique and simple magic system.
Equipment: a robust equipment list containing classic weapons and armor in addition to animals, gear, and even castles and ships.
Characters: Rules on creating and developing your character.
Rules lite: simple game rules relying on rapid resolution, action, and adventure.
Cool tools to get your creativity flowing: Magic item creation, alchemy, rune craft, spell scrolls, creature creation, traps, treasures, and more!
Adventure generation: we give you the nuts & bolts for developing memorable adventures, you sprinkle with creativity
Random dungeon creation system to help a GM prepare for a night’s fun.
A bestiary of over 45 creatures, ready to spread havoc on the world!
A broad brush-stroke setting, Keranak KingdomsTM, complete with brief history, atlas, and pantheon. A great backdrop for your epic saga.
Portable: fully indexed, e-book friendly, well-organized, and fits neatly in your pack or a large pocket. Take it with you and have it ready for an impromptu game. Try doing that with other fantasy role-playing game’s core rulebooks!
Within this zip file you should have:

Please join the site over at www.dwdstudios.com/barebones and get involved.  This game was written under a creative commons license, meaning YOU can write stuff too.  We already have several great promising adventure modules submitted, and we're excited to see what you add to the mix.