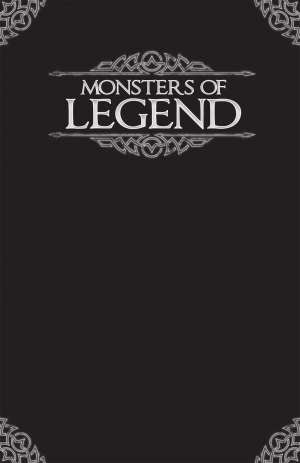 If somehow, someway you missed out on the Legend RPG Core Rulebook from Mongoose for a buck (still a buck, so you can grab Legend here - I'll wait).  Got it?  Good.  Now, that core book does not include the standard fantasy races (or any race besides human) nor does it include your monstrous adversaries.  This is where Monsters of Legend comes in.

The book is broken down by the following categories: Humanoids, Invertebrates, Dinosaurs and Reptiles, Creatures of Legend and Natural Life.  It's enough to start you off, but if you are used to the huge encyclopedic source of monsters nearly every edition of D&D has had, you might feel that it's a little light.  That's to be expected, as it is the core monster book.  I expect there will be further volumes later.

The artwork is very nice.  I'm no expert, so I can't tell if it's washed inks or charcoal (I think it's mostly washed inks) but it is very evocative.  It's all black and white, no color.

The PDF itself is bookmarked, but just the sections.  So you can go to the start of the Invertebrates section, but you can't go right to Crab, Giant.

It's basically a catalogue of monstrous adversaries for your players.  It fills that role well.  I just wish it was filled with a bit more.

Oh, and for the OSR crowd, it features a nice Chaos Creature Feature Random Table.  I'm going to yoke this.


Foes, beasts and creatures from every corner of the world can be found in this tome, ready to use in your games of Legend! Whether you are looking to populate your world with rare and exotic fiends to foil your players, or simply provide them with some gladiatorial entertainment, this book contains just what you need for the new Legend rules.

Like the Legend Core Rulebook, Monsters of Legend is released under the Open Game Licence.
Posted by Tenkar at 4:30 PM