Dungeons & Dragons - A Series of Half Editions 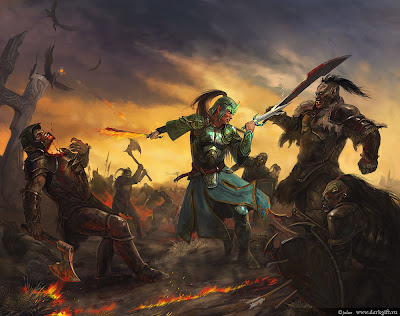 Had to get that outa the way.  Anyhow, ever since AD&D the game has grown progressed evolved changed in "Half Steps", although it was rarely honest in it's labeling of such.

AD&D had its Point Five moment with the release of Unearthed Arcana.  You either played with UA or you didn't (I never saw a group that had a middle ground back then), but the power level with UA changed the game play.  It was a Half Step Edition.

AD&D 2e had Skills & Powers as it's Point Five moment, although it could certainly be argued that the Complete Series of Handbooks to Remove the Player From His Cash were the Point Five Moment and that Skills & Powers were nothing more then a chance to experiment with concepts that were to come in 3e.

Dungeons & Dragons 3e (because calling it Advanced was so limiting) had it's Point Five moment with the release of Dungeons & Dragons 3.5e, which was the first (and only time) that the publisher of the Dungeons & Dragons game was honest with an upgrade to the RPG in the middle of the life of the edition.  Then again, they didn't have much of a choice, as 3.5e had many compatibility issues with 3e.  God, I just love multiple editions, don't you?

Dungeons & Dragons 4e, under the glorious days of the GSL (which also was revised to go from Ominous to Slightly Less So) recently had it's Point Five moment with the release of the Essentials Line.  WotC refuses to call it a Point Five moment, but as the class abilities in Essentials are different than the ones in the 4e Player's Handbook, I'd call it a Point Five moment.  Oh, and a money grab, as it was a way to repackage and slightly revise material that was already published in an attempt to soak the loyal player base.  It's dangerous to be a loyal follower of the D&D Brand.  One needs deep pockets or a serious line of credit.  Thank God for the OSR.

Now, the game NOT to be Called Dungeons & Dragons 5e, for although it is the 5th glorious edition of ADVANCED Dungeons & Dragons (otherwise it would be 8e or 9e depending on who is counting) apparently want to shed it's edition counting, much like Microsoft shed it's numbering by year, and went to edition number.

Nope, D&D 2012 is going to be full contact medieval reenactment combat.  Screw dice, it will require real player skill.  And if the DM isn't careful, he might just get himself killed.

On second thought, it's probably going to be more like Magic the Gathering.  You get a random assortment of pages from the Player's Skills & Powers Deck, and if you want more options, you need to buy boosters.

I really want Wizards to succeed, but they can't be The One Ring to Rule Them All (besides the fact that the Tolkien Estate probably has that trademarked already).  They won't be bringing back many that turned their noses at 4e and essentially stayed with 3Xe by going Pathfinder, unless they out do Pathfinder.  That's a tall order, and to do so they'll be working against the 4e they built up (and now have to bad mouth to start the tear down) and Pathfinder (which they essentially also built).  It's like a bunch of fucked up clones, same yet different, fighting each other to the death.

As for the OSR corner, some may dabble in the new edition, but few will fully give themselves to The Dark Side.  I'll probably dabble, as I'll be curious.  I might even, if it's really good, keep 5e as my "Bim on the Side".  But she better be damn good ;)
Posted by Tenkar at 12:46 AM