Friday Nite Movie at the Tavern - The Hebrew Hammer 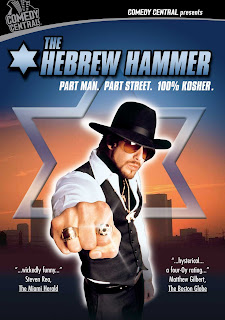 Friday's movie is getting mentioned late this weekend, as I was running around Saturday and today we went seal watching in New York harbor (I'll need to go thru the pictures before I can post any).  So, a bit late, we present to you, the Hebrew Hammer.

Sometimes a movie doesn't have to be good to be funny.  I suspect this over the top spoof of the 1970s blacksploitation movies hit closer to home for me then it may others, as I saw so much of NYC in it (and was even able to recognize some obscure locations) from landmarks to culture (alright, stereotyped culture, but still recognizable).

I laughed even tho I didn't want to.  Not sure if that is a ringing endorsement or not.

I could see putting together a one-shot using the Fate rules.  Everyone gets a racial / ethnic stereotype to play and get's to try to save the world from evil Santa - or was there already done in Spirit of the Century?
Posted by Tenkar at 9:39 PM