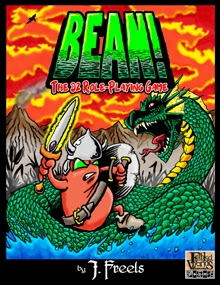 Bean! The D2 RPG has just released it's 2nd edition.  I happen to like Bean! a lot, and not just because it has a bit of a Tunnels & Trolls feel to it.  I like it because it's a nice, simple system that should be an easy one to introduce new roleplayers.

Some of you (like the recipients of the copies of Bean! I gave out a few months ago) may be wondering if they need to upgrade to the new 2nd edition.  You don't need to, but it is a nicer and fuller presentation.  Some of the stuff added to the 2nd edition was first presented in the free 1st Edition errata, such as skills and custom archetypes.

Now, if you are new to Bean!, this is definitely the version you want. A fuller spell list, more monsters in the bestiary, mounted and ship to ship combat, a cleaner explanation on how to roll... it really is a nice package.  Just like the original Bean!, you get a Solo and a GM adventure included in the rules.

Don't forget to pick up your free Bean! adventures.


BEAN! is an easy-to-master, rules-lite, d2 RPG system! It's perfect for introducing new players or children to the hobby, and will keep veteran gamers rollin' their beans with a system that's flexible and easily customizable to any setting. Complete in one simple volume, spend less time reading and more time playing!


The d2 game system is unique and quickly memorized, so simple, yet able to handle any situation on the spot, without having to thumb through volumes of obscure rules. The best part? You get to toss your beans! With a d2 dice system, you could use standard dice for "high or low" "odd or even" rolls, you could toss coins or any other objects that have two distinct sides, but we recommend plain ol' beans! They're cheap and plentiful, some people really enjoy customizing their own beans, and a handful of beans keeps the game moving along quick and easy!

Simple, versatile, and sometimes silly, welcome to BEAN!
Posted by Tenkar at 8:10 PM