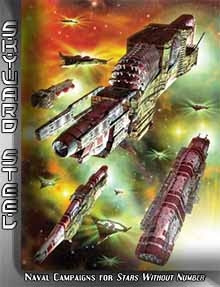 No review here for Skyward Steel.  Heck, I've barely had a chance to look at the free peek on the rpgnow site.  Still, Sine Nomine puts out good stuff and I expect the same from this.

Worlds Burn Beneath Your Guns.

The captain standing on the bridge, wreathed in smoke and the cries of the dying. The chief engineer, struggling to force that last precious burst of power from the fusion plant. The Marine sergeant holding fast in the hatchway, death to the alien boarders. The cold-eyed admiral, choosing the slain by the turn of a word and her orders to her bait.

Join the Thousand Lights of the Stellar Navy in this supplement to the FREE Stars Without Number roleplaying game. Take on the roles of the men and women of the Fleet, the sky-bourne protectors of the homeworld and its shield against the outer night. Whether a grizzled rating, dauntless officer, or elite Deep Black espionage operative, Skyward Steel offers both GMs and players the tools to embrace both the duties and the terrible freedom of these guardians among the stars.

Skyward Steel includes a host of useful tools and information for both GMs and players: