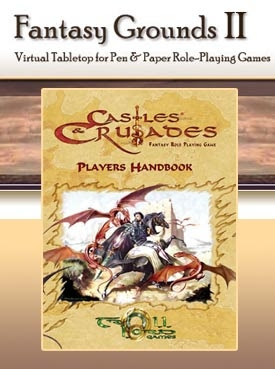 This past Saturday was my first chance to play with the updated Castles & Crusades ruleset for Fantasy Grounds 2.  My lord but they did an amazing job with the update.  Automation of combat bonuses right from the character sheet, a combat tracker for the PCs to look at, whispers between PCs, updated rulebooks... its a really neat piece of work.  Cost for the update?  Nada, so long as you had purchased the previous version.

As for the session itself:  if I had been on time it might have been even better, but I had my best time in forever (and I usually have a blast).  Maybe it was all the tea I was drinking instead of beer to keep me aware and awake, but I avoided the "junkie nod" that usually hits me after 11pm.

I'll avoid the play by play, as I'm sure my writing would not do it justice.  Suffice to say, lots of role playing and dice rolling, I spent much of my nite on the edge of my seat.

It's hard to believe this campaign has been going on for over 2 years via Fantasy Grounds 2.  I think I'm the last of the original party, and yes, there was a hiatus and later a change from weekly to monthly gaming.  Still, the campaign is going strong - even if the highest level characters in the party are 3rd level (Tenkar is a 3rd level Dwarven Cleric - who is more warrior priest in mindset).