Mini Review - Pyramid of the Dragon 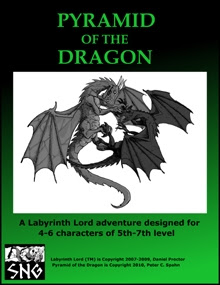 Pyramid of the Dragon is an Old School adventure from Small Niche Games for Labyrinth Lord (although easily converted to any of the Old School rulesets roaming the wilds).  It's level range is 5-7, so it hits the mid levels.

I did happen to enjoy the fact that the tavernkeeper's son spells his name just like I do, but I digress.  It's an adventure with dragons, wilderness travel and a decent dungeon set up.  The maps are drawn by hand, which is either "Old School" charming or borderline amateur, depending on your point of view.  I stand on the side of charming.

We get a few new magic items, and some new monsters (many of which originally appeared in LL AEC and at least one in OSRIC - so your milage may vary as to value.

This is the same publisher that brought us Blood Moon Rising and Inn of the Lost Heroes, so if you enjoyed those, this is probably a good pick for you.

Pyramid of the Dragon is a Labyrinth LordTM adventure for 4-6 characters of 5th-7th level. This adventure is a quick romp in and around a swamp known as the Blood Marsh that involves both wilderness and dungeon exploration. Challenges include a mixture of problem solving, combat, and roleplaying, including several potentially lethal encounters with a red dragon and various other denizens of the Blood Marsh, so characters who rely solely on the might of their sword arms may be in for a rude surprise.

The adventure begins with the characters traveling through the forested Border Hills along a well-beaten path or road. Why the characters are in the area is left for the Labyrinth Lord to decide. They may be on their way to or returning from an adventure, or they may be traveling to the frontier village of Holden that is located nearby.

Pyramid of the Dragon begins "in media res" with the characters witnessing an aerial battle between two dragons. When one of the dragons is mortally wounded and falls from the sky, the characters have the option to investigate the dragon's carcass or continue on their journey. Several chance encounters scattered throughout the adventure should eventually lead the characters to the fallen dragon's lair in the Blood Marsh where they can discover the ruins of an ancient city, save an unfortunate young man from a terrible curse, and thwart the plans of an evil red dragon.