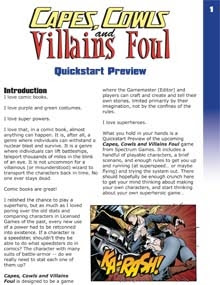 Seems like Supers have been all the rage this summer (wait, is summer over yet?).

Spectrum Games has released Capes, Cowls and Villains Foul - Quickstart Preview at RPGNow.  Lets see, we had the Villains & Vigillantes new edition released (and the original edition re-released), Icons, DC Heroes... I'm missing another, aren't I?  In any case, there's a new Supers game on the block.

If I only played the genre, my options would be endless ;)  It's free, so why not give it a peek?

Imagine, if you will, a superhero role-playing game that emulates how comicbooks actually work. When comic writers sit down to pen a story, they don't have a character sheet in front of them that defines precisely what the characters can do... how strong or agile they are, what skills they demonstrate, what the exact parameters of their powers are.

Instead, they give the characters what the story demands of them. If the story requires the power-armored hero to have stealth armor, he'll most likely have it on hand. Should it be critical that the hero with the magic amulet needs to generate a mystic shield, you can almost bank on her getting it. Does the hero with normal human strength desperately need to lift a gargantuan chunk of concrete off of his ally? Chances are, he'll be able to muster up the power to do so. It all comes down to what makes for a more entertaining story.

Capes, Cowls and Villains Foul, takes this fully into consideration by offering a game system that is open-ended and flexible, treating the players and Game Master like comicbook writers rather than just some people playing a game. The sky really is the limit... so why not soar through it like the hero you've always longed to be?

Powered by Qumana
Posted by Tenkar at 7:02 PM