The House of Blue Men - A Sorcery and Super Science! QuickStart

Sorcery and Super Science! is Expeditious Retreat's new RPG.  I don't think I can explain the game setting better then they do, so here it is:

After the cracking of the moon and before the rise of Atlantis the world was a place strange to the thoughts of honest men. The death throes of science amid the birth of magic sculpted new generations of conquerors who strode the lands forging civilizations of steel, sinew, and sorcery from the decrepit hulks of the ones that fell before. 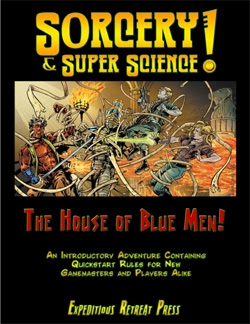 The House of Blue Men - A Sorcery and Super Science! QuickStart is a free peek at the setting and the rules.  At 48 pages, its a fairly large free peek.

It's written to be Old School at heart, or so they say.  I'll have to give this Quickstart a full read and get back to you on that.  First glance does show a professional prepared product.  Nice bookmarking in the Quickstart too.
Posted by Tenkar at 8:19 PM

Email ThisBlogThis!Share to TwitterShare to FacebookShare to Pinterest
Labels: Quickstart