I'm sure I'm not the only one with fine memories of the AD&D "goldenrod" player character sheets.  Not that they fit half the crap that your character carried, especially if you had to do with a single sided photocopy.  Still, they were worth their weight in gold and 10 times better then loose leaf paper.

Here I sit nearly 30 years later and you can print out character sheets yourself, on your own printer, and it's probably more useful then the old "goldenrods" were.  You can make your own (way beyond my ability), find ones on the net, or you can try Kenzer Co's Player Character Record Book instead.  Now, just so there is no mistaking, this is a 3.0/3.5/OGL uber character sheet set.  It could probably be used with Pathfinder with little to know issues, but using with some of the more OSR styled games may lead to some inconsistances, such as with saving throws. 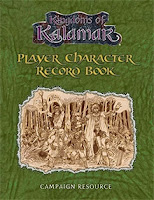 The spell sheets sheets and the NPC sheets are extremely useful.  Heck, I could see myself using the NPC sheets as a DM, as I could fit 4 NPCs per sheet for easy reference.  As a player, what few henchmen I had would probably have gotten a full PC sized sheet, especially seeing how we are printing these out for ourselves.

My main complaint is this is still set up like a dead tree product.  There is no need to repeat the same pages that are common to each class grouping.  True, its not costing extra, and it is easier to print a group of pages then a bunch of separate pages,  but I found it slightly annoying, probably without any good reason.

My recommendation?  One copy for the group and print it out for the party.  I'll take the NPC/Henchmen sheets if no one else wants them ;)
Posted by Tenkar at 6:51 PM