Realizing I've Grown, Well at Least Changed, as a Gamer 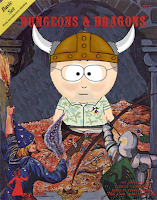 Back when I was playing HackMaster 4th Edition and really trying to get to be a level 3 GM (It was a thing......and this isn't a HackMaster story/post), I was also doing HackMaster demos at game stores and trying to get interest up for some future tournaments. A common reaction when chatting players up at the store was something along the lines of, "I like HackMaster (or my group plays a mix of 1st & 2nd Edition), but my group has been playing for twenty years in my buddy's basement and none of us are interested in playing anything new/different." Even though I used to be a complete Rules As Written (RAW) single-ruleset player, well....that changed. I'd love to say that it was because I matured in some capacity, but really it was because I got the opportunity to playtest HackMaster 5th Edition.

The experience was an eye-opener for me, mostly because I wasn't involved with the early playtest, but more towards the end of the playtest development cycle.

Although I had a definite preference, I did have experience with a variety of other games, so hopefully I had some value to add to the process. There was one thing with the old in-progress rules that the Development Team were adamant about including and I was adamant was beyond effed up....as in, I will NEVER buy, much play this game if this one core mechanic is publish as-is. Lucky for me, another playtester, who agreed with my assessment, was able to vocalized exactly why that mechanic was so effed up and I think her explanation is what got that mechanic changed.

Of course if it hadn't I guess we could've house-ruled it to make sense......but remember, I was really a RAW type of guy.

Fast forward at least a decade and I don't think my home group plays that much RAW. Our GM writes a few things and likes to run the group through his new creations. Usually things are a bit more in the polished....."about to publish" stage, but not always. Once or twice we've had to roll things back 'cause the whatever-it-was didn't work out as planned, but that was a rare. I think playing some odd mix of mostly BX with some elements that are-not-but-feel-like AD&D and these "home rules" has had me come around 180*.

This surprises even me, but I'm actually looking forward to playing my 1st Psionicist in my home group, mostly because I don't have a freakin clue how Psionics work. I think I have the rules from New Big Dragon Games Unlimited Basic Psionics Handbook, but I'm not even going to read said rules until I absolutely have to. I think I've flipped through them, but I don't recall any of it. Not having a clue will be a bit of fun, at least for a while. Eventually I'll need to know how everything works, but learning as I go along feels like fun. At least more fun than just picking up an entire new ruleset would be......

Posted by Christopher Stogdill at 6:00 PM

Email ThisBlogThis!Share to TwitterShare to FacebookShare to Pinterest
Labels: dnd basic, not Erik