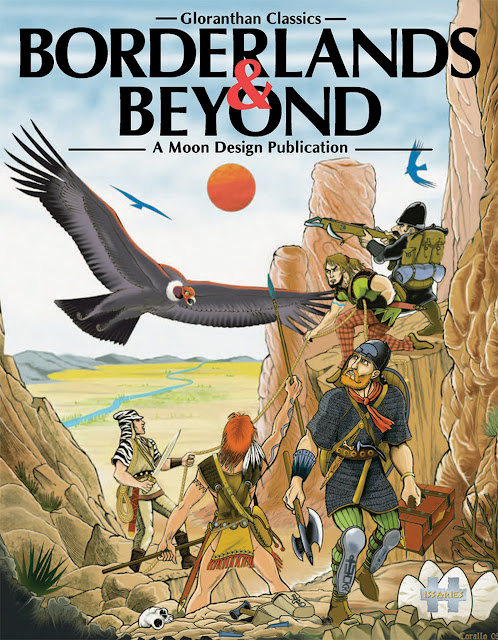 I've recently been bitten (again) by the RuneQuest Bug. I last ran a RuneQuest Campaign over 30 years ago, using the RuneQuest 2nd edition rules and the Pavis and Big Rubble box sets. It was an amazing summer of RuneQuest fun, and although we didn't call it a "sandbox" back then, it was certainly the first sandbox I ran.

I noticed last night that on the Chaosium website, they offer Glorantian Classics: Borderlands and Beyond for $18.99, in print plus free PDF - basically half off the regular price. Not owning a prior version of Borderlands (but remembering the rave reviews of it from years ago) I promptly ordered the hard copy and started perusing my newly acquired PDF.

I'm inspired to run a RuneQuest Campaign again, with Pavis & Big Rubble, as well as the Borderlands at my disposal. Apparently, I ordered a PDF copy of Pavis & Big Rubble from DTRPG in the past, and I'll be uploading that to my iPad, much like I've uploaded Borderlands. Edition changes don't phase me, as I've been running all editions of various D&D / OGL adventures for years using Swords & Wizardry rules. So long as the players don't know what the "true" stats should be, any stats you present as a GM are the "true" stats ;)

So, what do you get in Borderlands & Beyond?

This is an updated and reformatted 300+ page reprint of ALL of the information from the original Chaosium Borderlands boxed set, Plunder, and Runemasters.

Note, this is the last of the Glorantian Classics line Chaosium has in print.