Deal of the Day - Over the Edge Third Edition 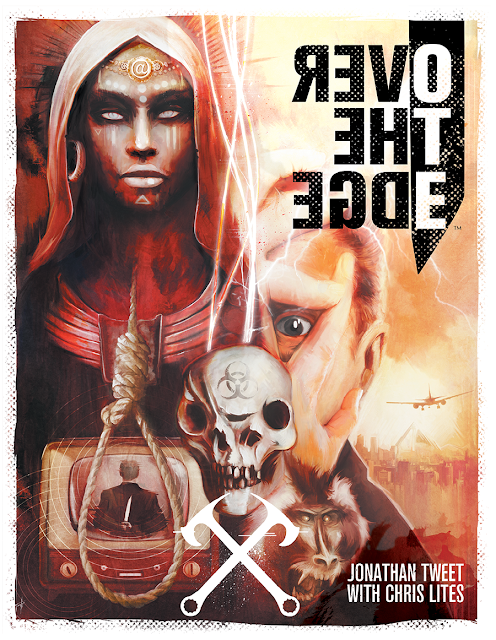 In the mid-90s I came across RPGs that allowed me to see RPGs differently. They touched on settings or situations that I had never encountered prior. There was one, Lost Souls, that showcased the recently deceased.

Then there was Over the Edge, which seemed a bit like a standard RPG meeting the X-Files while taking LSD. As you can rightly guess I never convinced my group to play it and for that, I am truly sorry.

Normally 19.99 in PDF, until tomorrow morning Over the Edge Third Edition is on sale for 9.99.

Over the Edge at a Glance

A fantastic cornucopia of fringe science, conspiracy, and hyper-reality. The island of Al Amarja is a rich sandbox to be filled with your craziest and most entertaining ideas.

Welcome to the Ultimate Democratic Republic of Al Amarja

During your stay with us, please remember that Liberty is Job One, Disarmament Means Peace, It's Polite to Speak English, and, of course, Paranormal Activity is perfectly legal.

Thank you for your consent.

The Edge is the weirdest city in the world. Get into trouble. Question your place in the crazed multiverse. Transcend mortal limits. Join a cult. Fight a baboon. Along the way, you might find out who really controls humanity. Unless, of course, you've been working for Them all along.

Over the Edge is the classic RPG of counter-culture conspiracy, weird science, and urban danger. For its third edition, the game comes roaring back in a completely reimagined relaunch by its original creator. Everything old gets a new take. Nothing is a retread. Every conspiracy, every neighborhood, every major gamemaster-character is portrayed with a new spin. It's not “25 years later.” Everything on the Island is reborn to surprise new and existing players alike.

At the heart of Over the Edge third edition are the nine districts of the Edge, each with a unique flavor, colorful characters, memorable locales, and a mélange of bizarrity ruled over by a patchwork of cabals openly tolerated or empowered by the all-powerful anarchic State. Behind this public face of the city, however, there is a secret world of conspiratorial factions, strange fringe abilities, cutting-edge technology, and cross-reality incursions.

The result is a crazed sandbox setting which is infinitely receptive to whatever offbeat and outlandish ideas the players and gamemaster choose to pour into it. Over the Edge adds a final dash of madness with the “GM's Secret Bag of Tricks,” a dozen fringe concepts and a gaggle of colorful characters, each of which can completely transform your version of the Edge or serve as the nucleus around which your entire campaign will form.

A simple 2d6 resolution mechanic uses a lightning-fast comparison of level and difficulty to generate rerolls instead of managing modifiers through addition and subtraction.

Three strikes and you're dead. But unless you're in danger of your third strike, you can safely take big risks, electrifying gameplay with dramatic, exciting moments.

The Tavern is supported by readers like you. The easiest way to support The Tavern is to shop via our affiliate links. DTRPG, Amazon, and Humble Bundle are affiliate programs that support The Tavern.
You can catch the daily Tavern Chat podcast on Anchor, YouTube,  or wherever you listen to your podcast collection. - Tenkar
Posted by Tenkar at 9:25 PM

Email ThisBlogThis!Share to TwitterShare to FacebookShare to Pinterest
Labels: deal of the day, over the edge