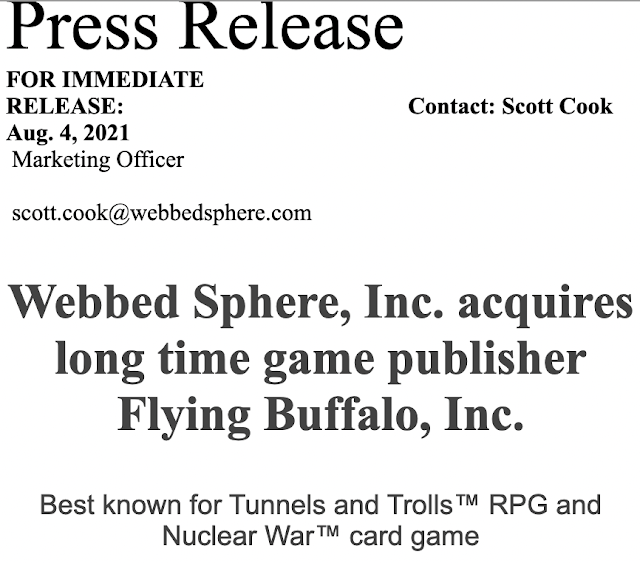 “Flying Buffalo and Rick Loomis hold an esteemed position in the history of gaming, and we are proud to now be a part of that legacy,” said John Ward, CE

legacy,” said John Ward, CEO of Webbed Sphere. “Flying Buffalo has thrilled generations of gamers over the past 50 years, and it will make a great compliment to our Toy Vault and Mchezo brand lines. I am excited about what the future holds.”

“It's always hard when your child finally grows up and leaves home, but I'm looking forward to a bigger, brighter future for Tunnels & Trolls under the organization of Webbed Sphere,” said Ken St. Andre, creator of Tunnels and Trolls. “May T&T spread even further to the greater world than it already has, and may Webbed Sphere make all their saving throws going forward!”

Douglas Malewicki, the inventor of the Nuclear War™ card game in 1965, said he’s excited about the opportunities the purchase of Flying Buffalo represents.

Specific announcements about Flying Buffalo properties will be forthcoming in the near future. The company plans to work diligently with retailers and distributors to make sure products are in stock and available to the public.

Flying Buffalo also plans to be an exhibitor at Gen Con, to be held in Indianapolis Sept. 16-19, and will release more exciting news as the show approaches.

Flying Buffalo, Inc. is a publishing company best known for the second ever role playing game distributed to the mass market - Tunnels and Trolls. It was founded in 1972 by Rick Loomis and Steve MacGregor as a play-by-mail game company, but also published numerous popular role playing games, card games, and gaming supplements. It is located in Scottsdale, Arizona.

You can catch the daily Tavern Chat podcast on Anchor, YouTube,  or wherever you listen to your podcast