Played a DCC Game and "Won" by "Losing" 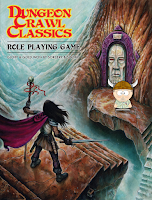 Special Note: I'm at North Texas RPG Con and exhausted. It's been a great con by almost any standard and I'm pretty much wiped. I'm pre-writing this at 2030 on Saturday night when I have a free moment and I should be resting before the midnight auction. I know I'll be dragging tomorrow anyway.....so screw sleep I'm putting up the post.

There are a few games I own I don't get to play much. Probably more my fault than the system's....maybe I prefer other systems or I get enough gaming in already (yeah, right.......that can't be it!). I like DCC, but for me it's a convention game. Maybe that'll change, but for now it's the odd convention game and listening to the Spellburn podcast.

I did get in a DCC funnel game that was unexpectedly good time for me.....I say "unexpectedly" because it was advertised as a 3rd level game and ended up being a zero-level funnel, which can be fun, but not what I was hoping for in the least..... 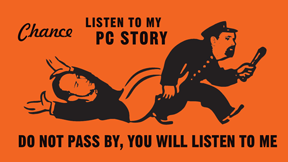 ....yes, this is going to be something of a PC Story and since I'm pretty sure it was an actual published adventure I'm going to forgo a lot of specific game-ruining aspects because that isn't the heart of this specific PC story.

This is the story of Jimbobob. Yes, if you want to continue reading you will have to suffer through said PC story. If not, Erik will undoubtedly have another post tomorrow...

That out of the way, this is the story of Jimbobob (Jim-bo-bob) who got rounded up with his fraternal twin sister Jillbobob and his best bud Scrotus and forced with a gaggle of others to complete not just a task that will lead to certain death, but THEN continue on and try to save the world from some BBG (Big Bad Guy) who is going kill everybody and everything at some unspecified "soon" time. Score of victims suckers have gone before and perished and the powers that be are already herding the next group to follow after Jimbobob and his compatriots are nothing but a memory and a bloodstain.

Miraculously the initial task was met without suffering too many loses. The group manages to secure the MacGuffin and there is a glimmer of hope that maybe the impossible task is not so impossible.....the group makes it back to the assembly point and is able to advance forward on the final step of the journey to confront the BBG. Our group has been able to build upon the incremental deaths successes of HUNDREDS that have come before, but the MacGuffin is more than just a means to get to the end, but a mighty tool, a weapon even, that can turn the tide for humanity. Our small, motley assembly of nobodies actually has a chance of pulling this off!

Jillbobob is just vaporized in an explosion of pink mist. Jimbobob is covered in the puréed remains of his sister. His one companion from before he was even born! What.....the....fuuuccckkkk.....

Evidently the MacGuffin has a killer of a downside (pun intended). It allows the wielder to perform magic and if there is a spell failure, the result is a random being suffers a "violent decompression event", or "gets popped" as the group quickly puts it.

What was the brief glimmer of hope for Jimbobob turns into a deep level of despair. Nothing matters, we're all going to die anyway so why bother........(I basically started channeling my inner emo and started speaking as much like Eeyore as I could, when using this guy). Scrotus is thankful for every moment the group has and getting closer to succeeding is worth celebrating, especially when we start losing group members to the perils of adventuring....and a few POP!s.

Eventually the group finds another MacGuffin, a different one, and hopes to find a third before confronting the BBG. There's a tantalizing "lead" but someone has to go all Tunnel Rat and start crawling into some stone tunnels/rabbit holes....something that will probably lead to a lonely and/or painful death.

"Whatever, we're all going to die anyway. I've been all alone since Jillbobob died anyway....." Jimbobob is sent into the tunnels with 50' of rope tied around him and eventually just disappears. The party waits for a while and then just leaves him for dead. (The GM didn't ask me to stamp the PC sheet 'dead' so I just STFU and thought maybe he'd be found later).

Through an unfortunate incident Scrotus now has MacGuffin #1 and another PC has MacGuffin #2 when the party faces off against the BBG and it is apparent that the few remaining PCs are true and rightly fucked. The world is fucked. This isn't just a BBG, it's a fricken B...B...G. It's like we were hoping to fight a Lizardman and then coming across fricken Godzilla! Holy shit people-who-ramroded-us-into-this-crap, I can see why you buried the lead. We could have saved ourselves the trouble and stress (of being POP!ped for one) and just slit our own throats on the onset of the adventure.

Luckily though the world might not be screwed as we are because while even one mighty MacGuffin won't do diddly-squat, at least in the group's hands, to the BBG, the other MacGuffin can turn one guy into a different type of BBG. Basically we might have a chance against Godzilla because our guy can turn into Mecha-Godzilla.

OK, a little honesty here....."we" are still righteously fucked, but Mecha-Godzilla boy had a decent shot at surviving this thing and saving everybody back home.

Out of Character (OOC): Yeah.....you think you might have seen a typo, God knows I can be full of them, but I did mean "had" because this is when Jimbobob comes back into the picture.

The nearly-useless MacGuffin changes hands a few times as people die from the BBG and maybe a few POPs. There's a bit of chaos happening when Jimbobob emerges from the tunnel into the final battle with the BBG and guess what happens to be on the floor near his feet...another MacGuffin! Since everything is fucked and we're all going to die anyway, might as well give the MacGuffin a go. Jimbobob tries to activate the magic and nope and he fails miserably.

OOC: At this point I think as a player I'll be all smart and maybe a little rules-lawyerly. There are only three PCs alive in the chamber, but IIRC the vaporization was a random effect.....did the GM account for the BBG when rolling off? Evidently this was a possibility and he had been rolling for the effect to target other beings outside the group before, but hadn't this time.....so he'll re-roll.

So it's the BBG against the one remaining PC, that it knows about, armed with essentially a useless MacGuffin, and then there's Emobobob, er I mean Jimbobob armed with an even more useless MacGuffin. The BBG rips through the other PC like he was a wet piece of tissue paper and it won't be long before Jimbobob is discovered and snuffed out just as easily.....

POP! The BBG is vaporized and the world is saved, but not Jimbobob. He just doomed himself to an eternity alone.....at least in his mind.

OOC: So I know I'm screwed and this is the end of the game with the GM clearly having a winning hand. Now, he may have just thrown me a huge bone, adventure wise, but I thought I had a rare rules-lawyering moment, one proud enough to post about it here at the Tavern, no less. While on the surface the MacGuffin really seemed useless because it had no real powers other than casting spells, and those spells weren't going to do a whole helluva lot to the BBG, like highly doubtful even a single-digit of damage, I noticed that the highest level spell had a DC30 spell check and made it clear if you rolled high enough you could pick....actually quoting from the book...."any two of the effects listed above". You know what was on said list...and I hope you've figured it out dear reader.....

.....failure. Failure was on the list. Now clearly the intention is to pick a beneficial spell effect, but in this case, clearly failure is an option.....and if I pick it twice, then I'm assured a pyrrhic victory.

Of course you'd think that if I'm typing this out now that I managed to pull off that 29 or 30 roll on my d30, or that I was able to burn Luck to get the desired results, but no....I just actually failed my spell check, so someone is gonna POP!, just not both Jimbobob and the BBG. It was all down to the die roll, which the GM let me make. Odds the BBG POP!s and even Jimbobob gets to reunite with his sister in whatever fresh hell serves as the afterlife....

Jimbobob saves the day but now he's stuck in a virtual mountain or riches that he can't possibly use.....well he could, but in doing so he'd undoubtedly release the MacGuffins into the world and how many more would suffer being POP!ped? I figure he'll just turn into the Mecha Godzilla and spend the rest of his days alone protecting the world from his group's sucessess.

Posted by Christopher Stogdill at 1:01 AM

Email ThisBlogThis!Share to TwitterShare to FacebookShare to Pinterest
Labels: DCC, not Erik, Storytime