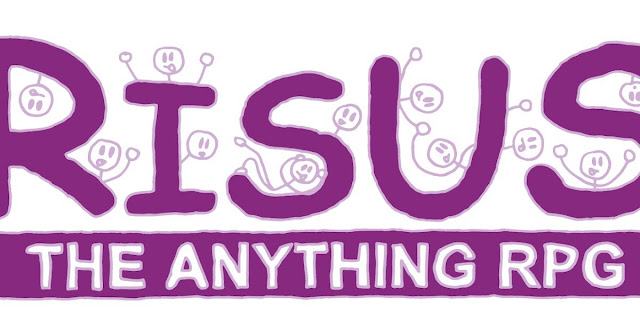 What can you get for an untold amount of money? Untold, because we aren't given a minimum bid. Why, Risus of course. Here are some highlights:

But more importantly, you also buy "obligations". What kind of obligations, you may ask? (here's where it get's interesting)

Part of the sale is adopting responsibilities related to a languishing, half-fulfilled Kickstarter from several years ago to produce some free Risus adventure scenarios in PDF form. Specifically, the Kickstarter provided enough funding to produce approximately 80 pages of adventure material (including handouts, pregens, etc. as appropriate) and only 40 or so have been published, in the form of the deluxe “showcase” module that is Toast of the Town. This means the public are still owed four additional free modules which should average about 10 pages each. In addition, approximately 50 higher-tier backers are entitled to a print-on-demand softcover collecting all five adventures (Toast of the Town, plus your four smaller modules), and some are entitled to sets of custom dice with little stick-dude faces where the 1 should be (an inexpensive custom item from Chessex; I will provide you with the master graphic), and a few are entitled to a random piece of original art from one of the modules.

Finally, Risus fandom has been promised a new edition of the Risus Companion. This could be a very minor liability: the current Companion could be spruced up to present-edition compatibility in a matter of hours and published almost as-is … or it could be a major undertaking with lots of new material, as you like. If you’re thinking of publishing a third edition of Risus itself, you might want to make it compatible with that … There must be a new Companion, but what that means will be up to you.

Depending on your own standards for design and playtest, and how much you pay your writers and production people (or if you do it all yourself), the total cost of eliminating the liabilities should run somewhere in the $300-$3k range (if you do the labor itself, the out-of-pocket expenses would be limited to shipping the POD softcovers and dice), and could be completed in just a few weeks.

If it could be completed in just a few short weeks for as little as $300, why has it been languishing for years? I call bullshit. $300 to $3000 is a huge range for potential liabilities.

Feel free, also, to ask more detailed or probing questions about the past performance of Risus titles or my projections for future revenue, the overall size and scope of the global fandom, or anything else you’d like to know … but questions unaccompanied by an offer will be given the lowest priority.

Wait, so one has to make an offer BEFORE the questions are answered? WTF?

Risus IS its community. Or communities. Were the system to be unsupported by S. John Ross, I think it would continue just fine without him. I suspect that John is hoping a Risus True Believer overpays for a system that is already owned in many ways but its community.

BTW, Risus is free over at DTRPG and other places.

Email ThisBlogThis!Share to TwitterShare to FacebookShare to Pinterest
Labels: risus