Ken Whitman - Looking for New Fools - Involved with yet ANOTHER Kickstarter

I will say this about Ken "Whit" Whitman, he is stubborn and persistent. He simply can not give up Kickstarter. I suspect he keeps telling himself: "I'm only one project away from hitting it big!"

Ken's latest project "not his project but maybe" is Unmortal : Out of Time Short Film. Ken is listed nowhere on the Kickstarter page, but his LLC (or expired LLC) Little Monsters Entertainment, was involved in the worthless trailer.

So, what did Mr. Kostner have to say when an inquiry was made about Kenny's involvement in the project?

"Thank you for reaching out to me. Our company has contracts with many independent companies, actors, and crew members, and we do run background checks on all of our contractors. Mr. Whitman has no legal or criminal activities on his record. During past meetings, he seems very respectful to all that attend. I do know of his past Kickstarter failures and assure you that Mr. Whitman is not involved with our company's business practices and is merely part of the creative team along with several dozen other talented contractors. Once again, thank you for your concern, and have a wonderful day."

Yep, I guess Robert left the "go fuck yourself for even asking!" part silent, but man, it still came through.

As I stated in the vidcast, I recommend backing for a buck just to follow this trainwreck. 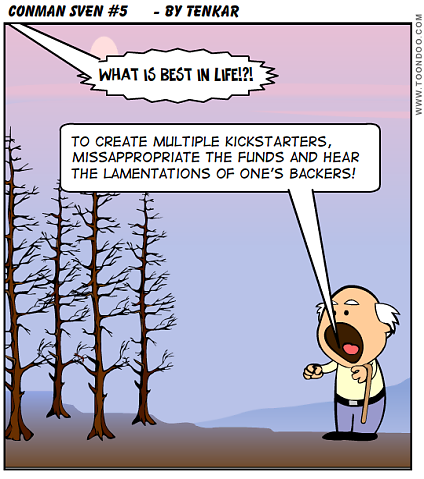