Imagine my surprise when I was pinged by a Facebook thread to a new thread in the Gary Con Facebook Community. 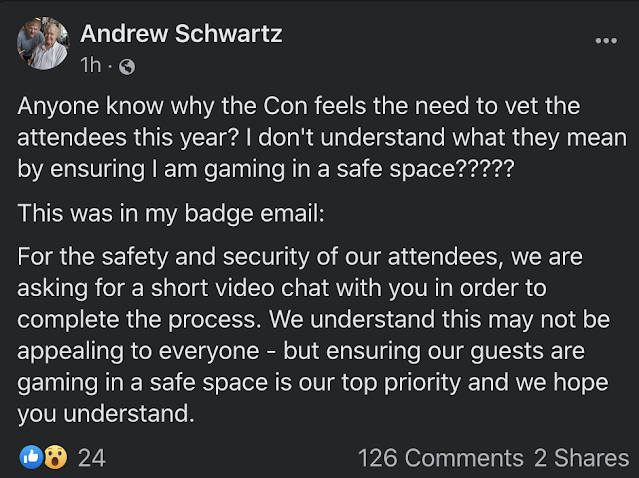 My initial assumption was that it was a fake email, but apparently, that is NOT the case, and it was an email sent out on the behalf of Gary Con.
The concern from many attendees, registered and potential, was that the vetting was possibly going to be on political ground, but it was later clarified that the vetting of potentially thousands of attendees was to weed out one asshole. An asshole that committed an offense at last year's Virtual Gary Con and apparently was already known to convention staff.
Edit 2335 1/22/2021: I've conversed directly with Luke Gygax, and he has updated me with the following:

ID buyer to badge so right person has right badge.  Link badge to Discord ID to help lost players get to right GM.  Verify is VOIP or webcam.  No interview or vet process.  No time or desire to do that. Just like a badge check in.
Second purpose is to help deter bad actors and ban those that are proven bad actors from future events.  The rules are con policies and thats been the case for years.  So nothing new there.  Gamers are good people by and large but any big group may have some bad actors and it’s a responsibility to take prudent action to deter, dissuade and limit those bad actions.

I've included some relevant screenshots from the thread below, but I'll make my observations known here:

This is simply a horrible implementation of a vetting policy. It sounds like someone on the Gary Con Staff realized late last night they may get trolled again by last year's bad actor, and this was the solution they came up with. Registration for the convention opened in late 2020, and this policy should have been in place BEFORE anyone put their dollars down for badges.
The argument that picking up your badge at a physical convention is your vetting process does not hold water. I doubt everyone manning the badge table during the usual early convention mad-rush is matching badges to faces. No one is being asked for ID in my expereince.
If you have a bad actor at a physical convention at your game table, the GM needs to get support staff and have the person removed. At a virtual convention, you simply boot the bad actor from your VTT.

Not every attendee has access to internet speed high enough to effectively transmit video. Is that now a requirement to attend a virtual convention?

The man-hours required to implement this for thousands of attendees, as well as the joy of scheduling such interviews, is more than daunting.

In the future, are we going to be asked for ID and to pay for background checks before attending a physical convention?
All of this drama, disruption, and annoyance of your community to weed out one bad actor? I don't know what their offense was, but to take action like this, at so late a time, makes me suspect that at a physical convention it would have been an arrestable offense. This is literally panic mode. late in the game. Someone dropped a ball and this is the result.
It's very simple to fool the video vetting process - simply have someone else sit in for the video. I suspect it is more likely an innocent person will be denied attendance to the convention than the bad actor will reveal themself.

I agree with weeding out bad actors from convention spaces, but this is not the way to do it. 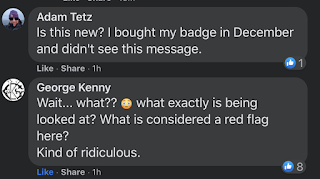 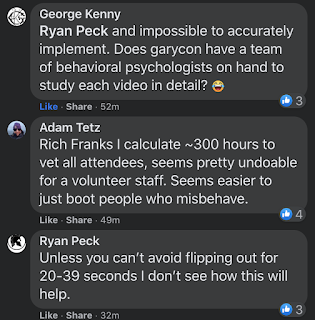 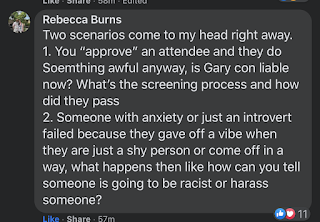 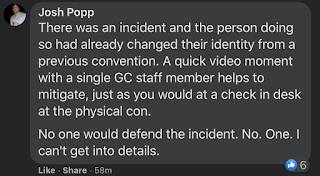 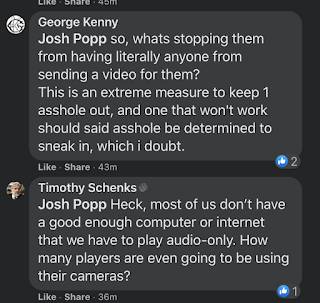 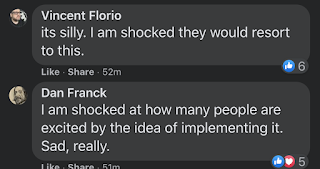 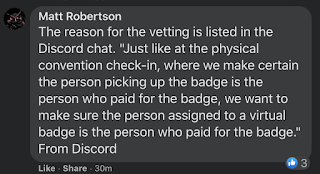