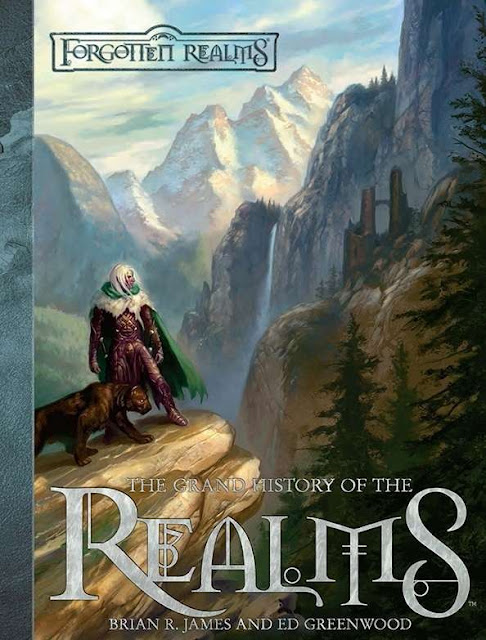 The Forgotten Realms can be a fetid mess to figure out as a timeline with all of the products released over the decades. Grand History of the Realms kinda solves that problem, at least through the 3.5 era.

Clocking in at 162 pages, I see this as a trip down memory lane from when I was waist-deep in Forgotten Realms fiction and source material

Normally 9.99 in PDF, until tomorrow morning the Grand History of the Realms can be had for only 4.99.

What It Is. The Forgotten Realms is a huge and rambling place. That's no surprise, considering the number of authors and game designers who have added to the Realms over the past decades. At least in theory, all of these stories and events interlock into one cohesive world history (although admittedly sometimes better than others, depending on the extent of the authors and editors' Realms-lore).

With the quantity of products, however, it's often impractical for a single DM to understand the scope of a campaign's history or to understand what's happening at the same time elsewhere in the campaign world. Brian James made it possible by creating one massive and coherent timeline of the Forgotten Realms' published history, listing dates and events from every single Realms product published by TSR and Wizards of the Coast. The amount of work and attention to detail needed to pull this off somewhat boggles the mind, but the results are delightful for fans of the setting.

It's particularly effective to see this history collected in chronological order because the Realms' rich history has a variety of ways to count years in its calendar. There's Present Reckoning, Dalereckoning, Northreckoning, the Shou calendar, the Netheril Year, the Aryselmalyr calandar, and the Roll of Years (Year of the Cauldron, Year of the Bent Blade, Year of the Starving, and so on.) Tracking what happens at what time isn't easy for DMs who set their game there. This book solves that challenge neatly.

Email ThisBlogThis!Share to TwitterShare to FacebookShare to Pinterest
Labels: deal of the day, dungeons and dragons, forgotten realms