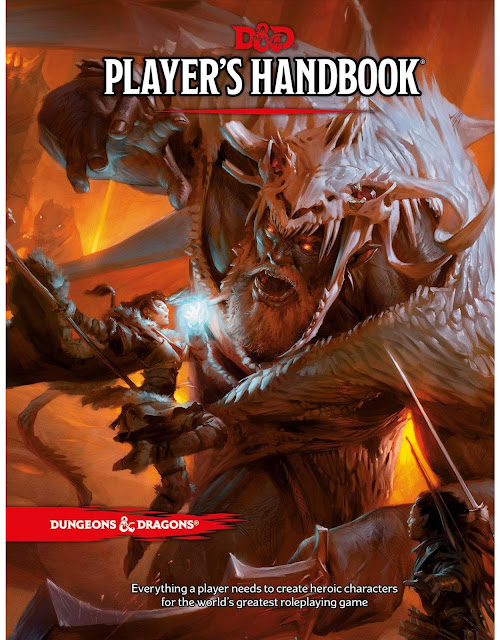 Most RPGs are available in PDF format, and thus can be read by computers or tablets and the print can be enlarged, or used by "readers" that many blind or visually impaired members of our community use, but WotC does not release any of its 5e material in PDF format, thus severely limiting the access to the world's most popular RPG.

Or so I thought. I stand corrected, as it was pointed out in the Thursday Night Hangout on The Tavern's Discord Server that there WAS a version of the 5e Player's Handbook for the visually impaired. I did a bit more research and found all three core books are available (as well as a 1980 version of D&D Basic ;)

core books in navigable audioIf you’ve ever attacked a cave full of Orcs with your Vorpol Sword, right after losing 12 Hit Points that lowered your Strength score (which you mitigated with a Cure Wounds spell), you might already know the fun of playing Dungeons & Dragons—D&D to its fans.

Because it’s a role-playing game, a shared experience between a Dungeon Master who describes events and players who describe how they want their characters to respond, D&D is an ideal game for players with visual impairments.

“At its heart, it’s about using your imagination,” said Megan McArdle, an NLS senior selection librarian. So it makes sense for NLS to make D&D books accessible for its patrons.

“I checked our holdings,” McArdle said, “and saw that even though we had not updated it since we did it back in the 1980s, the D&D Basic Rule Book by Gary Gygax still got a respectable number of downloads on BARD,” the NLS Braille and Audio Reading Download website.

Clearly, the demand was there for NLS to take on a bigger D&D project to address requests from the large community of visually impaired players. So a team formed to update the D&D collection at NLS.

When NLS released the fifth edition of the format this summer, D&D players were delighted.

“Fantastic to be part of a mainstream gaming community that is making their visually impaired players feel so welcome,” one wrote on the NLS Facebook page.

Another wrote, “I’m not sure I can describe how happy this makes me!”

The project was a complex one for producers and narrators, especially because of the difficulty of accurately replicating a print-book experience for visually impaired readers. One challenge was including descriptions of charts and graphics that are essential to game play. Another was figuring out how to correctly pronounce the name of monsters and magical items, such as the magical mini-submarine in the world of D&D, otherwise known as an Apparatus of Kwalish. For the latter, NLS went to Wizards of the Coast, D&D’s publisher. “They offered to help with pronunciations and provide other primary sources we might need during the recording process,” Castellucci said. “Wizards was very responsive, and even their franchise creative director, Mike Mearls, helped with our producers’ pronunciation questions.”

“As a player, watching these books go through the selection process and being able to add them to NLS’s collection has been very exciting,” Castellucci said.

For McArdle, there was an added bonus. “As I researched what books to get for D&D players,” she said, “it was fascinating to read about the work folks are doing in the arena of making board games accessible.”

Email ThisBlogThis!Share to TwitterShare to FacebookShare to Pinterest
Labels: accessability, dungeons and dragons