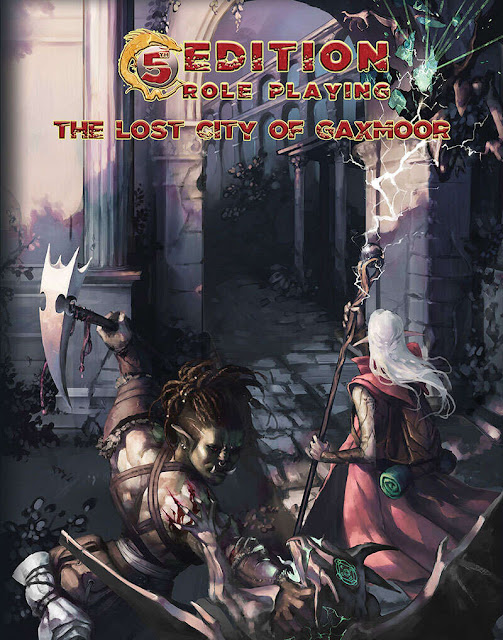 The Lost City of Gaxmoor is currently available for D&D 5e from Troll Lord Games. Yes, there is a current trend / market for the conversion of OSR releases to the 5th Edition Dungeons & Dragons rules. There just might be a Tavern Chat podcast episode hiding in that trend.

5th Edition Lost City of Gaxmoor -- The sun sinks slowly over the desolation of the ancient and once grand Empire. In the distance, just upon the slopes of a broad cliff, lie the ruins of a city. Her alabaster walls wind their way along the rocky mesa, guarding buildings both fair and ruined. It was a great city in its day, now long since fallen to the ravages of time and war. Long ago she stood as a shining doorway to the east, a place for rest and restocking of provisions for those on the long trek into the wild lands of the barbaric frontier in the Western Empire. But all that is past for this, the ruins of the Lost City of Gaxmoor.

The Lost City of Gaxmoor, written by Ernest G. Gygax and Luke Gygax is a sandbox adventure converted to the 5th Edition of the world's most popular role playing game. Designed for characters that range from 1st to 10th level. It is a monumental city adventure where your characters are plunged into city dominated by fighting factions, monsters, demons and all manner of creatures. Use it as a stand alone, integrate it into your own world, play in the Burning Sands or the World of Aihrde.

The Lost City of Gaxmoor is a game master's dream. The setting is full to overflowing with adventures, adventure hooks, set ups and more. With almost 200 Areas of Interest and a veritable host of NPCS, as well as factions of monsters at war with each other, the NPCs and soon the characters as well, it offers countless hours of fun. Throw in the machinations of ancient gods and the rise of a demon prince and you suddenly have a campaign setting that just won't quit.