Deal of the Day - Lords of Olympus Diceless RPG 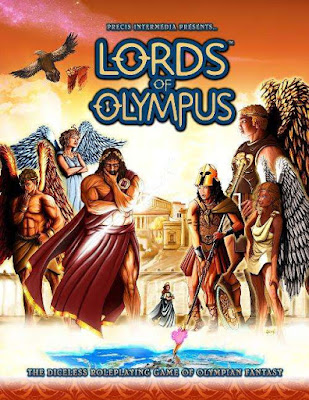 Today's Deal of the Day is the Lords of Olympus Diceless RPG. I own a few diceless RPGs, going back to Amber and one day I'd like to play one of them ;)

Normally 14.95, until tomorrow morning Lords of Olympus Diceless RPG is on sale for 5.95.


Portray gods and demigods -- children of Olympian Gods, Titans, or Primordials in this diceless roleplaying game of multi-dimensional mythology Fantasy. Explore new realms or the classic worlds of Earth and Mythological Greece. Visit Zeus' Olympus, Poseidon's Seas, or Hades' Underworld. Mix politics with intrigue, alliances with wars as power-struggles and vengeance drive stories. Or, go the route of lesser power with mortals and heroes.

Lords of Olympus provides a new and original game inspired by the rules of the most successful diceless RPG of all time. The goal of this book is to not only be successful and enjoyable as a game in its own right, but also maintain the interest of players seeking out and experiencing the original and greatest diceless roleplaying game.

Email ThisBlogThis!Share to TwitterShare to FacebookShare to Pinterest
Labels: deal of the day, diceless, lord of olympus