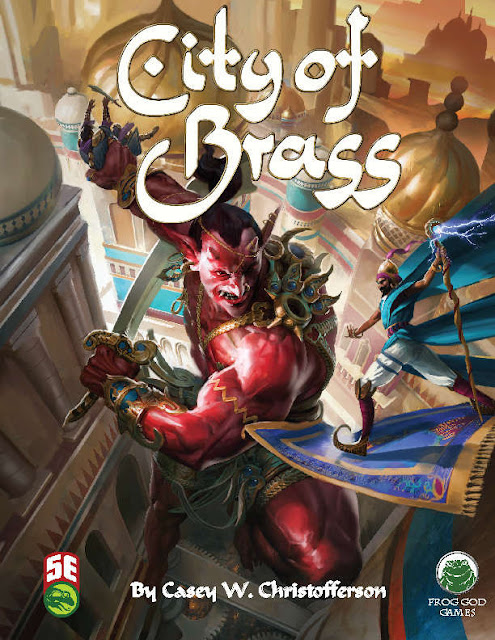 City of Brass is one of the best-looking releases from Frog God Games. I think it does an amazing job of showcasing their new stable of artists as well as presenting an entertaining adventures / setting. The City of Brass PDF is normally 50 bucks - yes, not cheap - but as the Deal of the Day, it is on sale for $15.

If you want City of Brass in Print PLUS PDF (or for Swords & Wizardry), it's normally 100, but you can snag it for half off if you go to yesterday's Tavern post ;)


Good folk have vanished. Those who were once disparaged and forgotten now wield power unlike anything seen before. Rulers and sages turn a blind eye to the disturbing events unfolding around them. In every corner of the Lost Lands, the Cult of the Veiled One spreads unchecked.

Prophesizing a cleansing jihad of flames and the coming of the Burning One, the cult has erected its brazen spires in every land. What follows depends on the wit and courage of mighty heroes who must rise to the occasion and take the fight to the enemy in its very stronghold. Will they succeed, or will they succumb to the temptations of the Veiled One’s court and join in the conquest of their home world? A fabled city of wishes on the edge of an eternal flame. The City of Brass is a rich combination of sand-box style role playing adventure, planar exploration, and twisted dungeons designed to test even the most seasoned adventurers.

Adventure Begins Across Planes of Fire and Deceit

Beginning with low-level challenges in the familiar confines of the Lost Lands, the adventure leads characters on a thrilling journey through multiple planes of existence culminating in the exploration of the City of Brass itself. The gleaming towers and floating platforms of the city hold terrors and wonders such as the Great Repository and the Minaret of Screams. Characters may choose to take a turn in the Circus of Pain, raid the floating Pyramid of Set, or join the resistance to the Sultan’s oppressive rule and lead an assault on the palace itself! A phoenix rises fully formed from the ashes of the past. The City of Brass is re-imagined for the new renaissance of fantasy role playing games, brought to you in the epic style of old school fantasy campaigns of yesteryear.

About City of Brass

From the design team that brought you Bard's Gate and Sword of Air, the City of Brass is an adventure unlike any other. With full color art and maps, new content and new organization, the City of Brass returns bigger and better than ever! An Adventure Sourcebook for characters level 1-20. New versions for Fifth Edition of the world’s most popular role-playing game.

So what’s new in this release compared to the original Necromancer Games Boxed Set?

The original City of Brass was divided into 3 sections and has been revised and reorganized throughout with 150,000 new words of adventures and material.

Section 1: Cult of the Burning One - Now includes the following adventures
Section 2: The City of Brass is now newly organized with details on factions, new locations in the Plane of Molten Skies.


That there is an affiliate link above. Affiliate links keep the beer cold and the taps flowing here at The Tavern.