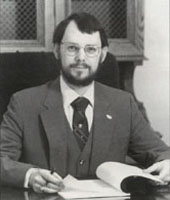 Blume met Gary Gygax at the Gen Con game convention in Lake Geneva, Wisconsin. Gygax and his friend Don Kaye had recently formed Tactical Studies Rules in Lake Geneva in order to publish a new type of game that Gygax and Dave Arneson had developed, Dungeons & Dragons. Gygax and Kaye had each invested $1,000 into the venture, but still did not have enough money to print the game. In December 1973, Blume offered to become an equal partner in the company for an investment of $2,000.[4]:78 Using Blume's money, the three partners printed a thousand copies of the new game and sold their first copy in January 1974. Blume and Gygax also coauthored the Warriors of Mars miniatures wargame adaptation. Before the end of 1974, the first printing of D&D had sold out, and demand for the game was skyrocketing.

As various new rules and products for D&D were created, Blume provided material for The Rogues Gallery,[9] and co-authored the Dungeons & Dragons supplement Eldritch Wizardry with Gygax in 1976,[10] naming the character Vecna as an anagram of Jack Vance. Blume and Gygax also co-authored the Boot Hill role-playing game as a tribute to Don Kaye, who had been a fan of Westerns.[11][12] Blume also authored the Panzer Warfare miniatures wargame in 1975.

Blume died on March 27, 2020, at the Lakeland Nursing Home in Elkhorn, Wisconsin from Lewy Body Dementia and Parkinson's disease
Posted by Tenkar at 5:58 PM