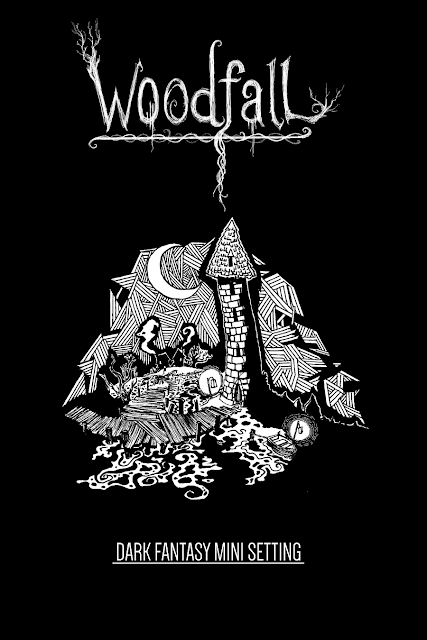 I'm surprised I don't already own this. This is something right up my alley. Woodfall is a  DTRPG Best Gold selling system-neutral setting, suitable for OSR play. Normally 12 bucks, recently 9 bucks and now $7.20 in PDF until tomorrow morning.


Explore a dark fairytale setting, wade through a misty swamp, get caught up in the fighting between warring monster clans, discover a strange town of witches and thieves, and search for forgotten treasure.

Woodfall is a swamp belonging to a king where witches, thieves and outlaws are squatting. They have built a town on top of the swamp and have resisted several evictions. The town is a hub for black market activity and magical folk.

The surrounding forest and swamp is a hexcrawl filled with various monster factions.

The Setting has many political themes, influenced mostly from 15th-16th century European history but also includes contemporary political themes and satire. Woodfall village depicts anti-authoritarian peasants in revolt against a kingdom. Elements of influence are taken from :the German peasants war, the anabaptist's, the diggers (of the 1600's), the free miners in the forest of Dean, the history of the witch trails in Europe and history of squatting in the middle ages in Europe ( Tŷ unnos ). Woodfall village is thus a strange village that players might not have encountered much before in fantasy games.

Yep, those are affiliate links above. Affiliate links are like spell points for bloggers - they give us more blogging power and coins to buy us beer...

Email ThisBlogThis!Share to TwitterShare to FacebookShare to Pinterest
Labels: deal of the day, OSR, system neutral