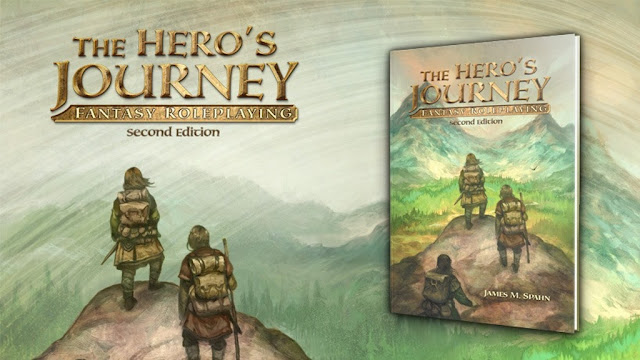 I've been waiting for The Hero's Journey 2e Kickstarter to launch for a while now. I've known about it, I've gotten sneak peeks and I'm truly amped up.

Full disclosure - James Spahn is probably the closest I've come to having a brother. We've both been there for the other at the drop of a dime. I can't think of a truer friend.

The Hero's Journey 2ed is James' baby, perhaps nearly as much as his daughter Trixie. We've spoken about his passion for the project, and it shows. Trust me - I've read much of it ;)


The Hero’s Journey Fantasy Roleplaying, Second Edition is a fantasy roleplaying game that blends classic tradition and modern game design to bring you an experience where players take up the mantle of heroes in a world of danger and magic inspired by classic fairy stories and timeless fantasy literature.

Whether you’re taking a Knight clad in shining armor astride your grand steed, a cunning Burglar hoping to use your silver tongue to flatter a terrifying Elder Wyrm while your friends slip away, or a dedicated Yeoman who has given your heart and soul to defend the good and true people of the world from the strange dangers of Fairie and beyond, The Hero’s Journey, Second Edition creates a gaming experience firmly rooted traditional western folklore where the player characters are more than just sword-swinging mercenaries looking to kick in the door, kill the monster, and claim the loot. In The Hero’s Journey, Second Edition, they are all that stands between civilization and the unimaginable dangers just beyond the wild…

The game is written, the art is done, the editing is finished and layout is done! The PDF has already been uploaded to DriveThruRPG, and proof copies ordered!

This game is ready to go. We just need your help to get the word out about it, and help make sure everyone gets paid!  Gallant Knight Games has already paid for the art, layout, and editing, but making games is more expensive than that.

The long term success of a game can often depend on retail stores, gaming groups and more. The goal of our project is to run a focused, tight campaign that will allow us to make a high-quality offset print run of the corebook in both softcover and hardcover. We believe James has created a work of art here, and we want to show case that with the best print run we can do.

The day the funds are delivered to Gallant Knight Games you'll get your PDF and we'll put the game to print. This will be a very fast turn around and a very tightly focused project. We're producing one book, and everything else is digital.

I'll be grabbing James for a Fireside Chat in the next few days :)

Email ThisBlogThis!Share to TwitterShare to FacebookShare to Pinterest
Labels: kickstarter, the heros journey