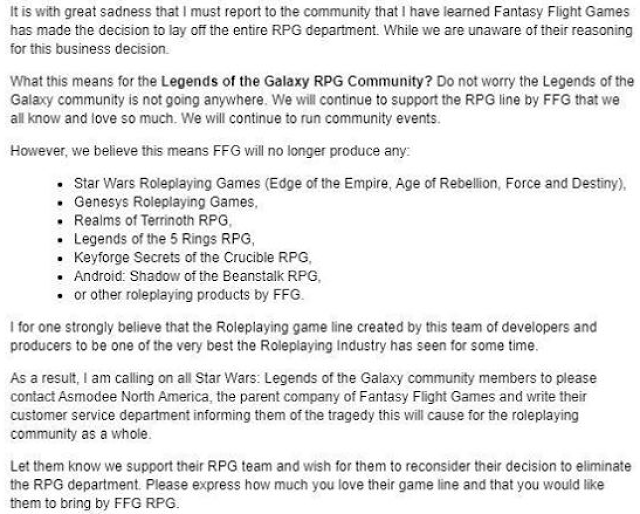 Then there was this yesterday:

Cubicle 7 drops its Middle Earth License and now Fantasy Flight Games is apparently ending its Star Wars RPG. Could it be that the licensed properties of this magnitude leave little margin for profit?

edit - this was sent to me from someone who's insight I respect:

You pay your RPG staff 40k a year.

The retailer buys it for half retail.

What MOST other large companies do (C7 did this) is have ONE guy who runs each IP and everyone else is on freelance or short term contract.

It's what WotC does.

So most likely, FFG is gonna install a head of their RPG department, cancel RPGs that aren't cost-effective, and then have one manager for those that remain that are.

RPGs made for all of 9% of FFG's revenues back in 2016 I think. Then they expanded heavily.

Star Wars has a solid fanbase of buyers, but the fandom as a whole is pissed.

L5R happened and no one really cared.

So they went to Genesys to cut external costs.

Genesys can still make money for them because it has a core book, player's guide, and the Foundry where fans can make content and THEY make money.
Posted by Tenkar at 8:36 PM