Deal of the Day - Wilderlands of High Fantasy, Color Maps 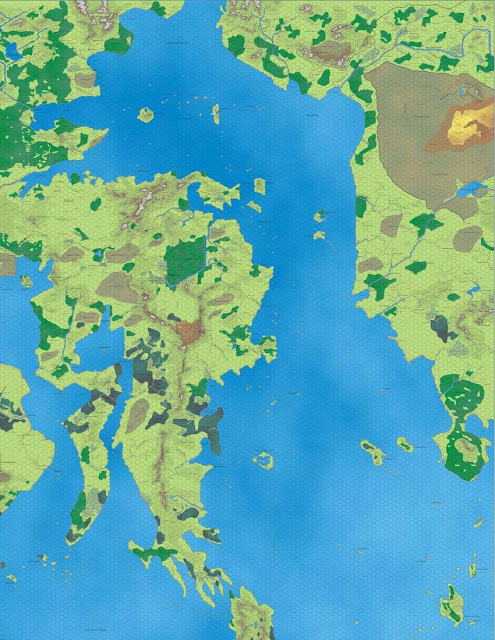 Note that buying the Wilderlands of High Fantasy, Color Maps will get you the Guidebook PDF as well. There are 18 maps to the Wilderlands divided into four sets of guidebooks and maps. This deal is for the first set of five maps including the City State of the Invincible Overlord.

The guidebook has an introduction and map commentary by Rob Conley. Each map in the guidebook is detailed with the following listings: Villages, Castles & Citadels, Idyllic Isles, Ruins & Relics, and Lurid Lairs. Any statistic or rule is compatible with Swords and Wizardry and various classic editions of the original roleplaying game. (Borrowed from Rob's Bat in the Attic post)

In 1976, Bob Bledsaw and Bill Owen went into business as Judges Guild. Their initial offering was centered on a magnificent 34" by 44" map of the City State of Invincible Overlord. First appearing at Gen Con IX, it was sold literally out of the trunk of a car during the convention.

Now forty years later those maps have been redrawn in full color. These maps preserves the original detail and applies known errata and corrections. Each was drawn as part of single 6 foot by 8 foot map encompassing the entire Wilderlands then subdivided and cropped.

The print option adds the following:
Ten overlapping full scale maps of each half of the maps.
There is a separate print product avaliable for the Wilderlands of High Fantasy Guidebook if you want a print copy of the Guidebook. Otherwise the PDF for the guidebook is included in this product.

This product is a authorized Judges Guild release for the Wilderlands of High Fantasy.

Note: That is an affiliate link above. I thank you in advance.

Email ThisBlogThis!Share to TwitterShare to FacebookShare to Pinterest
Labels: bat in the attic, deal of the day, maps, wilderlands