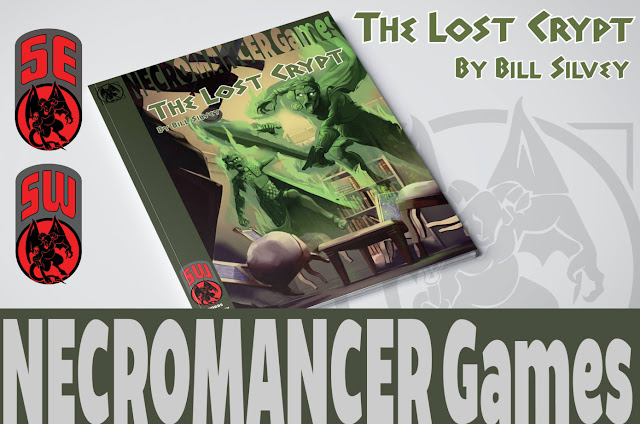 "Ever wonder what it would be like to write an adventure with Gary Gygax? Around the year 2005, Gary started working with a small number of authors on a project to write new material for his world setting (which was totally not called “World of Greyhawk”). Bill Silvey was one of those authors, and this book includes the story of working with Gary as well as the adventure Bill wrote for inclusion in Gary’s campaign world. For obvious legal reasons, none of Gary’s original material is included in Lost Crypt: this module is all Bill’s work. However, those who are interested in Gary’s world setting will be interested to read material that would have been included in it if Gary had lived to see the project through..."

I love finding gaming stuff that was written far earlier than the day it hits publication. It's like finding a time capsule of RPG goodness that you don't have to stress about removing the shrink. To my eyes,  The Lost Crypt: A Classic Crawl is a modern release of a piece of gaming history.


Almost lost to the pages of history!

The Lost Crypt, originally inspired by master of role playing game adventure himself was almost lost to the annals of history. Until now! Written by veteran RPG scholar and scribe Bill Silvey, The Lost Crypt is an old school rules style romp through an ancient tomb and hidden lairs filled with clever monsters. Originally written for OSR rule is designed to be a challenge for veteran characters of 7-8th level.

So, of course, I had to find out more details of the rebirth of Necromancer Games, and here we go: Necromancer Games is a wholly-owned subsidiary of Frog God Games. As an imprint, it is like the punk rock side of Frog God - good stuff that might not fit well under the Frog God banner, but under Necromancer Games and its storied history, it becomes a perfect fit. I've been told of some future projects under the Necromancer label (I'm effectively under an NDA) and I am truly excited :)
Posted by Tenkar at 9:38 PM