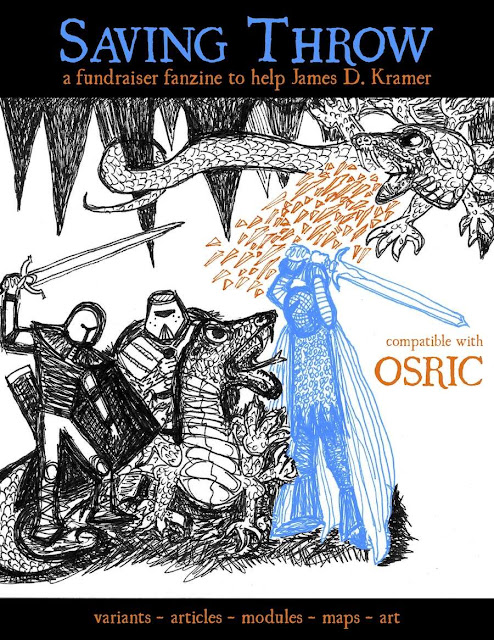 James Kramer is probably best known for Usherwood Publishing, the most recent publisher of OSRIC.

You may know Jim Kramer from his Usherwood Publishing modules & supplements, or his work helping produce works like OSRIC and Knockspell. You probably didn’t know Jim had multiple brain surgeries to remove tumors, and the battle has gotten much harder. To help Jim and his family during this difficult time, a group of his friends, collaborators, and first edition enthusiasts banded together to make this fundraiser fanzine, where all royalties go directly to Jim and his family.

For the lucky price of $13, you get two treasure maps, three referee tools, five new spells, six modules, at least nine new monsters, twelve ready-to-use NPCs, and more. Plus the knowledge that your purchase helps a family during a difficult time.

Note #2: We are still in the process of gathering artwork for some of the articles, so don't be surprised by any of the blank spots. We will notify everybody when we update the pdf with new art, and you can download the latest version from your library.

Yes, there is an affiliate link above. Affiliate links keep The Tavern's lights on and will not affect the amount of monies that will go to the publisher and James.